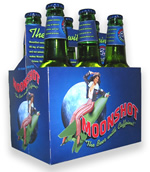 New Century Brewing's light beer Moonshot '69 (5% ABV) has added caffeine, and because of the Four Loko-inspired caffeinated alcohol ban, the FDA sent the company a letter. Much like Four Loko, the beer has to be fundamentally changed or pulled from shelves. Said the owner, "This is Prohibition in 2010." [NYT]