Back in July, writer and TV host Anthony Bourdain announced a contest on his book's website — he invited the public to submit a 500-word essay that answered the question "What does it mean to cook food well?" The winner, selected personally by Bourdain, would get their essay published as a new chapter in the upcoming paperback edition of his book Medium Raw.

After we ran the post "Anthony Bourdain Will Publish But Not Pay You," Bourdain reached out and told us he'd personally "pony up ten grand for the exploited author/winner" on the condition that "Eater/Raphael will present it." Here now, fulfilling our end of the bargain, the photo proof of the hand-off, and a brief interview with the man himself: 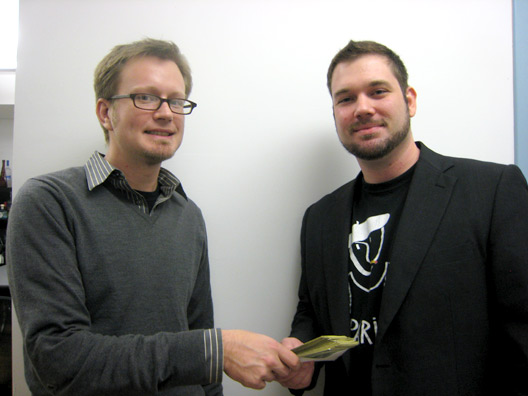 Are you a fan of Bourdain?
I am a huge Bourdain fan but I didn't know he was a writer until earlier this year. I came across Kitchen Confidential at a used bookstore and read through it in a couple sittings. I thought it was great.

How'd you find out about the contest?
I'm not really sure how I found the contest, probably just clicking links. I sat for about 15 minutes thinking about what cooking well means to me, wrote my essay and sent it in. I love food and I also enjoy cooking too. I think good home cooked food is one of the few things in life that can make everything right.

Was the money the motivator?
I would have entered the contest even if there was no cash prize, so it's really an awesome bonus.

Do you write anywhere else?
I don't have a blog, or Facebook account, so the only writing I do is when I email. To be honest I forgot I even entered the contest and I thought the email from Harper-Collins was spam at first glance. I never thought I would win, there were so many amazing essays.

Having won, are you gonna be doing more writing now?
I've had some positive feedback from my essay, so I'll probably try to write more soon.

What did you end up doing during your weekend in New York? [Michael lives in Dallas.] Did you spend all the money yet?
Our weekend was really good. We went for a walk through Central Park, checked out the Metropolitan Museum of Art, had a great dinner at Les Halles, a great lunch at Casa Adela, and we did some shopping. We spent a little money here and there, but no big purchases on anything extravagant. Sorry if that's a bit boring, but I'm still not really sure what I want to do with the bulk of it yet. We'll probably take another vacation. Maybe to Europe or Brazil.

[Michael asked if we could run a full quote, here it is:]

I want to give a huge thank you to Anthony Bourdain, Harper-Collins, Raphael and Eater.com, winning the contest was completely unexpected and completely awesome!