Brewing Towards a Greener Planet

Share All sharing options for: Brewing Towards a Greener Planet 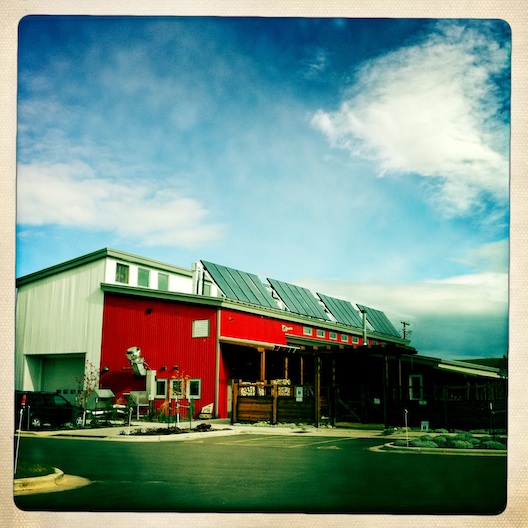 Brewing, as much as it is ever-so-deeply loved, is also a resource-heavy affair. Vast reserves of energy and fresh water are required for growing the grain and hops, for use in the brewing itself, for cleaning up before and after, and for distributing the goods around. By some estimates it takes 6-8 gallons of water to make a single gallon of beer, and who knows how much in terms of carbon-based fuels on top of that. But the good news is that scores of breweries around the country are taking craft beer green with sustainable energy, organic ingredients, and old-fashioned activism.

Colorado's New Belgium Brewing Company, for example, is one of the most eco-conscious brewers in the world. The makers of Fat Tire Amber Ale boast a wind- and solar-powered showpiece of a brewery; the major buildings were built with beetle kill pine. Even their Tour de Fat, an annual bike festival, is convened in celebration of zero-emissions commuting, with a concert on a solar-powered stage and beer served in compostable cups. Employees even get a free new cruiser bike after a year on the job, one of the reasons Outside Magazine called it one of the Best Places to Work in the U.S.

Today scores of breweries are taking up the cause, far too many to list (though feel free to add more in the comments section below). They're recapturing C02 and methane gas from operations for reuse in the brewing process, building taprooms out of reclaimed wildfire and windfall wood, using easy-to-recycle and quicker-to-cool aluminum cans, feeding local livestock with spent grain, using recyclable paper and cardboard, installing solar and wind generators, and encouraging bike commuting for customers and employees alike. Here, just five of the many alesmiths doing their part.

Uinta Brewing Company, Salt Lake City, UT
From catchphrase alone (“save water—drink beer”), this Salt Lake City microbrewery and brewpub makes good beer without wrecking the neighborhood. Named for the soaring Uinta mountains, UBC is 100% wind powered and repays customers that reuse six pack carriers with swag from the gift shop. Then there's the fact that spent grain goes to ranchers rather than landfills. And did I mention the beer, like the pale, bitter, and toasty Cutthroat Pale Ale? It's good, too.

Ska Brewing Co., Durango, CO
Don't let the periodic Husquavarna chainsaw giveaways this brewery sometimes stages dissuade: these guys are all about saving the trees. The makers of medal-winning beers like the rich Ten Pin Porter and the crisp, honey-kissed True Blonde partnered with local power co-op La Plata Electric Association (LPEA) to rely on renewable energy. They also are in the process of tweaking their shiny new brewhouse to utilize solar heating panels, and recycle heat and water, putting them in contention for a lofty LEED certification.

Sierra Nevada Brewing Co., CA
Using super-efficient fuel cells and a system of recycling huge amounts of CO2, and with close to 98% of packing materials recycled, the makers of juicy, toasty-sweet Sierra Nevada Pale Ale have long been considered leaders in “green” brewing. But with the completion in 2008 of a huge solar array (to really geek out, see its live output here) that allows the company to derive almost all of its energy from clean, onsite sources, this 30-year old Left Coast institution made its beer even more satisfying to drink.

Deschutes Brewing Co., Bend, OR
Oregon’s once-tiny Deschutes Brewery now plies its foamy wares around sixteen or so states in the West and Rocky Mountain region. Which is a great thing for beer lovers, and for salmon. Here’s why: after a six-month review in 2007, authorities certified one of the Bend company’s brewhouses organic. Green Lakes Organic Amber was the proof, a rich and refreshing copper hued ale made with five kinds of certified-organic barley and “salmon-safe”—that is, irrigated with extreme care with respect to river runoff—hops.

Red Lodge Ales, Red Lodge, MT
“We have Montana’s largest solar array right now,” says brewer Justin Moore, explaining that the panels help heat up the lodge’s brewing water and taproom floors. Among other innovations from the makers of juicy, delicious Bent Nail IPA: a “free air” system which utilizes sensors and the outside air to keep beer fresh inside up to nine months a year, and an in-house bio-diesel operation to run company vehicles and delivery trucks.