Of Montreal Talks Southern Gourmet and Tacos in Mexico

Share All sharing options for: Of Montreal Talks Southern Gourmet and Tacos in Mexico 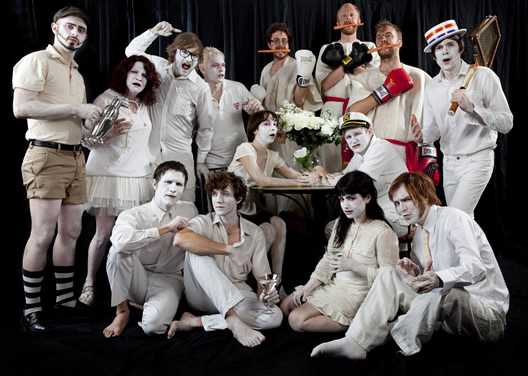 Of Montreal's sound is shaped by an ever-changing cast of characters and love for the whimsical community of Athens, GA. When frontman Kevin Barnes moved to Athens in the late 90s, the band morphed from a pop solo project to a sort of psychedelic collective, with dramatic stage shows, and elaborate costumes. Flash-forward to today and the band is a regular on MTV and Late Night, has performed on SNL, and even had their song used in an Outback Steakhouse commercial! I caught up with one of the group's core members and keyboard player, Dottie Alexander, to talk hometown eats and mystery meat.

Having lived in Athens, GA for over a decade - have you cultivated a Southern food bias? Any Southern dishes you feel pretty strongly about?
Definitely.  Athens has really cultivated the "Southern Gourmet" aesthetic over the last decade, and I find myself missing that kind of food when I'm away.  Shrimp and grits and collards are two of my favorites.

What are your favorite restaurants in Athens and what are your regular dishes there?
I'm a big fan of The National, which has a revolving seasonal menu, and the Diner Burgers at The Globe are amazing!

You recently got married. I heard the celebration was a blast with a killer after party to boot. Can you tell us a little bit about the grub at the big event?
We wanted the entire event to be a celebration of Athens, as well as the two of us, so we went local on everything.  White Tiger catered with amazing yummy barbecue.  We did our rehearsal dinner at Big City Bread, and they really pulled out all the stops!

Of Montreal is notorious for its bigger-than-life stage shows and massive entourage. How do you handle dining requirements with such a big group?
We have a few vegetarians, and some... "choosy" folks, but the rest of us are pretty adventurous.  We just had an amazing trip to Mexico where we tried everything from upscale seafood to street tacos.

Do you usually eat together or does everyone fend for themselves?
It really depends.  We like to have a few "family dinners" while we're on the road, but everyone's schedules (the crew and the band) are different, so we usually split into smaller groups.

Any special requirements you have on tour yourself?
I avoid fast food, but other than that, I'm pretty open.  I like to try regional things when I can.

What has been your best food-experience on tour?
Well, like I said, we just got back from Mexico, where there wasn't a bad meal to be found.  Japan was pretty amazing too.  We had a meal in Osaka that consisted of a bunch of chopped up mystery ingredients (Maybe octopus?  Maybe duck?) which were grilled in a barfy-looking blob on a hibachi in front of us.  We were each given tiny spatulas to shovel the goo into our mouths.  Turns out, it's delish!

Do you guys ever treat yourselves to high-end dining?
Sometimes.  I like to try and get away with my husband when I can, and we'll Yelp a fancy place from time to time.  There are a string of amazing Italian places on Thompson Street in Soho in New York City that we love.  Sushi is also a favorite for everyone.

How do you guys feel about fast food? Any favorite chains?
We avoid fast food like the plague.  This does not apply to certain members of our crew, some of whom have found McDonald's on the four corners of the globe.  Personally, I will go for street food (kebabs, tacos, etc) over fast food every time.  If we are somewhere remote with no other options, we'll stomach Subway as a last resort.

What is your favorite city in the US to tour in because of the food?
It has to be New York, right?  The "slow food" trend is everywhere in the City now.  A new favorite of mine is a place called The Farm on Adderley in Brooklyn. Craft is also amazing.

What is the one food item you can't live without when you're on tour - your rider staples?
Fresh veggies and cookies.

You guys play a lot of festivals, which ones in the US have the best food?
Coachella wins.  Hands down. Filet mignon and crab legs.

Of Montreal's latest record "False Priest" is out now on PolyVinyl Records.

Check out Of Montreal's video for "Coquet Coquette" (of course, directed by and featuring all Athenians!):