Share All sharing options for: Eric Ripert Spies Double Rainbows, All the Way

Chef and Eater Award winner Eric Ripert keeps getting followed by double rainbows! Channeling his inner viral video-maker Yosemitebear, Ripert tweets: "Our new book Avec Eric (page 8) has a real double rainbow. Since then twice on book signing it appear again behind me! What does it means?"

Last year when the television series Avec Eric originally premiered, there was a shot of Ripert with a double rainbow behind him. We wrote, "Possibly a case of perfect timing, we can somehow imagine that Eric Ripert's mere presence can summon rainbows into existence." 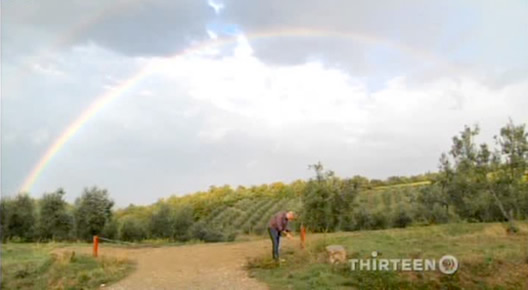 A still from Avec Eric, season one, episode one

In that episode, Ripert philosophized about his cooking approach: "I cannot really define how the light and the sky ends up in a plate, but it's just all those experiences in life that I accumulate definitely give me, maybe we can call that a 'cooking wisdom.'" Even, one can assume, the double rainbows.

Whoah, Eric Ripert, all the way.