Think about it: They review a McDonald's and then turn around and review Mizuna. I just imagine bored, jobless layabouts with not many friends who are convinced that they're going to have a bad time before they even step through the door of a joint. The kicker is, you can't respond to these inbreds and try to educate, or at least explain, why some things happen the way they happen. Have a little fun, for chrissakes. Loosen up when you go out, and let me be the stress ball in the kitchen busting my ass for twelve-plus hours trying to make you the best food I can. Fuck you!

Of course such a thing does not go without comment on Yelp:

There's already a thread — "Comments on Westword food blog are ripping Yelp" — with 174 comments and counting. In the thread, commenters pretty much tell him to fuck off. Someone even called him a Neanderthal! And several question the fact that he hails from Arkansas (because apparently they're all inbred there). 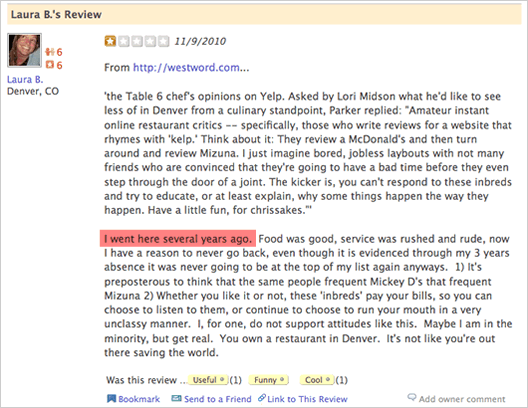 Bonus: as if to prove his point, today a Yelp user, incensed by his comments, wrote a one-star review of his restaurant based on a visit three years ago (screencapped above). Guess it's better than writing a negative review for a restaurant that hasn't even opened yet. Stay classy, Yelpers.