Next Iron Chef, Episode 5: Scent of A Woman

Share All sharing options for: Next Iron Chef, Episode 5: Scent of A Woman 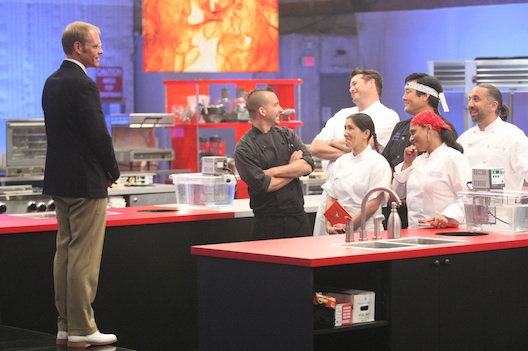 Last night as I huddled inside my house on Halloween night, pretending not to be home and scared to death of the roving 20 year olds in full masks — if you're old enough to mug someone, trick or treating becomes virtually indistinguishable from extortion — the six chefs remaining on The Next Iron Chef also played make believe. They made believe they were in the military. They didn't need fatigues for this. In fact, all they needed to enjoy the camaraderie and respect of the U.S. Army Corps, there personified in Lt. Col. Barnes, was to shout hoo-ah over and over again.

"It's funny," giggled Tsai, "that the Army guys love Pacino so much they quote him all the time." He didn't actually say that but I don't doubt that he didn't. Sometimes gems end up on the cutting room floor along with chewed up Skittles and schmutz. Lt. Col. Barnes was there to urge the contestants to cook with the secret ingredient, potatoes, and, as the guiding word of the show went, respect them. 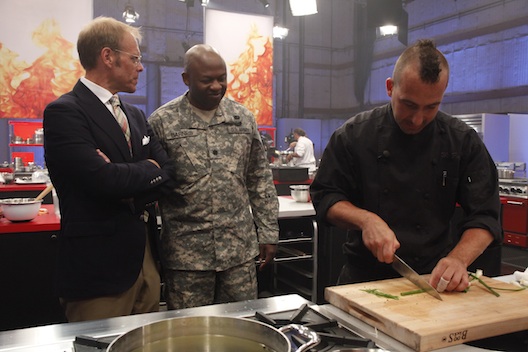 A sliding door slid and behind it was a truck full of potatoes in variegated hues. Alton Brown gave a little bit of history in inimitable arch Altonian style. [It sounds smart but you end up actually knowing less that what you started with.] And then the chefs kowtowed before the mighty potato product. Some did. Some didn't. Canora used his little melon scooper and scooped out little potato balls. If Angelo Sosa were Marco Canora he might say, "I'll be honest witchoo. I made love to those potatoes." Marc Forgione tried and failed to make agnoletti and ended up with gnudi which he rather cleverly described as respecting the potato by tasting like all the toppings you put ON the potato. Respect by occlusion, very smart. Caswell made a tater tot with an entire white truffle which he monopolized from the start. Preventive truffle use, very canny.

Tsai made sweet potato risotto with star anise carrot syrup, very Tsaiaian. Immediately a rivalry developed, or rather was further aggravated, between Marco Canora and Ming Tsai. What a plurality of voices! Canora, having shown mad props to the potato through melon-balling it, really hammered home the respect issue which met with angry resistance from Ming Tsai who asked, koan-like, "Does it respect the potato to use six types of potato?" Unfortunately for him, that's a pretty clear yes. Forgione lost this one and Canora won. And, since TNIC is a zero-sum game, this means that Tsai also lost. 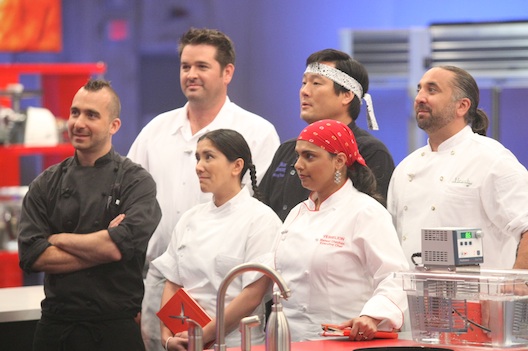 There's a commercial break and knives slash through space to signal the return of the show. Alton Brown unfurls a school map of the United States, very pedagogical. Chefs will be asked to cook four dishes, each representing a geographic region of the United States of America. Sadly, because Seattle has no food at all, concessions must be made which in turn throw everything off kilter. The North becomes the Midwest. The West is SoCal. The East is New England and the South is Southeast. Bypassed are, as stated, the Pacific Northwest which is really a shame and Texas, also a shame. Instead the chefs do their best to ape the regional cuisine of America. John T. Edge must be rolling in his Mississippi lair.

It's useless and pointless knowledge to catalogue exactly what each chef does. [That might be the point of the recap but I'm not sure and I don't think so.] Suffice to say, there is more than one way to essentialize geographic cuisine. Canora, cheekily, makes a raw veggie salad as his Western entry. Tio pressure cooks a pork belly into pot roast and "finesses the fun" out of both a lobster roll and dirty rice (North and South, respectively) in the words of the bald judge with the accent. Strangely she gets accolades for using a pressure cooker, a common device used when time is tight to soften meats. But it seems like that's rewarding something that is a normal achievement. In fact, her admission that she hadn't used a pressure cooker prior seems to indicate piss poor planning and should earn her demerits since, after all, she's appearing on a show predicated on time being tight and meat being tender. Anyway, she pulls it off.

Chauhan makes clam chowder and serves Hawaiian luau in an avocado bowl. Forgione, I think smartly, chooses to virtuosically recreate four emblematic dishes: Steak Tartare from Delmonico's, Wolfgang Puck's Chinois Chicken Salad, New England Clam Chowder and Cornmeal Crusted Halibut over Collard Greens and a Strawberry shortcake. "I'm not trying to show off," he says, though he is. Caswell, on the other hand, plays Proust and relies on memory and nostalgia to imbue his dishes with their geographical meaning. Walforf Salad, first eaten as a child, wows the judges but it's his Bertie Bee's Collard Greens that earns him his berth. 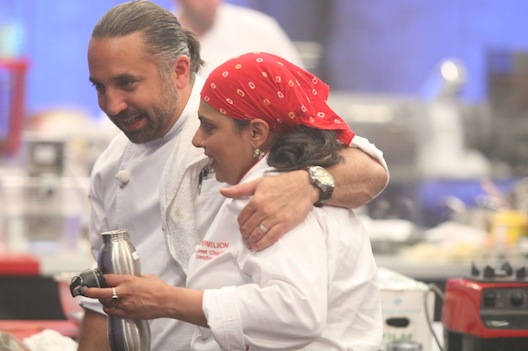 In the end, it's between Canora and Tsai whose gazpacho came with kombu encrusted halibut, whose scallop was butter poached, who quail was barbecued in the Asian style and whose veal was nice and tender. Tsai won though he didn't escape without a serious neg by guest judge José Garces about plating. "You might want to think," he said, "about doing something more contemporary" which seems to be one of those criticisms more like "Your looks just aren't all that great" moreso than "You've got some collard greens stuck in your teeth." So Tsai wins (and Canora thereby loses, zero-sum game) but it's Chauhan who is sent home, barely beating out Forgione whose halibut was a disaster. With that, the last foreign-born cheftestant is ousted while the five remaining head to Vegas. Don't be surprised. It is, after all, the American way. Hooah!