On Tuesday talk show host David Letterman apologized to Rachael Ray for giving her a hard time on a pre-taped segment; Friday night the segment with Ray finally aired.

Before Rachael Ray came on, Letterman channeled his inner Andy Rooney and talked about why Americans are "teetering on the brink of obesity." He blamed cookies, the American "culture of abundance," and food television. Specifically the shows Cupcake Wars and Ace of Cakes:

There's a million different shows on American television, and there's one: Cupcake Wars. You realize there's a billion people in the world starving every day, and there's a group of assholes having fights over cupcakes. They're fighting over cupcakes! ... Does that seem right to you? Well she's got a lot to answer for when she gets out here....

There's another show where this guy and his staff try to build cakes that looks like things... They're always in a panic: "Oh oh, we just a rush order, somebody wants a cake that looks like a riding mower."

When Rachael Ray came on, they shared some niceties, and Letterman dug in:

Said Letterman, "What kind of things of things are you cooking on your show? Because I'm so upset about this because I know I'm ri— And then all these other — like the Cupcake Wars. Honest to God, that should be stopped. 'Oh, we're having a cupcake war.' No, you're not!" He continued:

Believe me, working in television, I've had a comfortable living. But if you're gonna have these shows where we're fightin' over cupcakes or building a cake to look like a giraffe, these people who do that should take a percentage, no, all of it, all of that money, should go to the World Food Program or some American food distributor that's taking care of people who can't feed themselves. They shouldn't be making money on it. 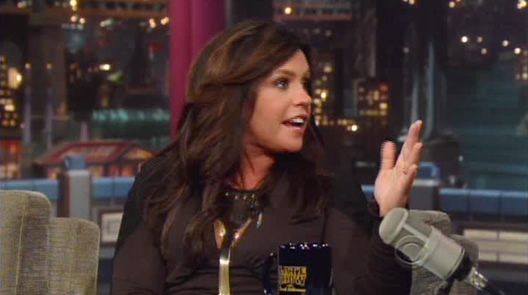 Rachael Ray agreed and tried reason, and she talked about education and school nutrition: "Maybe you could try a whole wheat pasta instead of a white starch pasta," she said. Letterman interrupted her. "That'll never work," he said. "I'll tell you why. I've had the whole grain pasta. It's not that good. [Audience laughs] That's the problem... If you go to a culture where people are not fortunate enough to not have this great abundance, the people tend not to be obese."

"Interestingly enough," said Rachael Ray, "In a lot of the programs we do in public schools, when you give kids access to really good quality food and just a bowl of fruit, they'll go for it, they will take it over a cookie."

Ray responded, "I agree, and I also think that with child obesity you can dramatically lower it at the same time you're battling hunger. And I think that once the 111th Congress comes back in, we should all of us push to makes sure they do something for us before they end the year." She got the last word and spoke about her non-profits, scholarship programs: "Well I make my living in food, I figure that's the way you give back."