Share All sharing options for: Redzepi and Chang on Poisonous Mushrooms and Chefs as Terrorists at the NYPL

After a few introductions in which, by my count, variations of the phrase "best restaurant in the world" were uttered 652 times, the three amigos came onstage for a 45-minute talk that focused mainly on Redzepi and what he does at his restaurant Noma. For the somewhat familiar i.e. anyone that's read the Bruni article, watched the Charlie Rose episode, or read basically any interview with the Nordic superstar, the affair was a bit of a snooze.

Reichl was textbook, keeping the talk within the realm of the epistemological cooking Redzepi has become famous for: What truly is a carrot? Where does it come from? How should we treat it? In all fairness to Reichl, the crowd, classy as it looked, had its fair share of rubes and folks who seemed like they were hoping for prune juice recipes from the toques.

The first question was prompted by an introductory video presentation on Ferran Adriá's visit to the Library a few years ago. Referring to the Catalan chef's comment that you can't and shouldn't worry about understanding his food, Reichl asked if Redzepi's mission could be described as being the opposite. He agreed and then began to explain the first in a series of demo videos of renowned Noma dishes. They included Vintage Carrot, the Hen and the Egg, The Sea, and Asparagus and Spruce. For every single one, the Macedonian hottie got up from his chair and walked the audience through the entire process. If Chang is the jock Son Volt fan who drinks beers, doesn't have any kids, and describes his aims as "we just try to make tasty food," Redzepi is the colorful European, the guy who can't shut up about passion, magic powders, and how much he loves his little daughter.

Among Redzepi's most interesting responses was the one to the question, "Why this type of cuisine?" As in the past, he described how he had worked in some of the greatest kitchens in the world and that his original intentions were to return to Copenhagen and do his own take on the three-star thing. But he changed his mind after staging at elBulli, an experience that gave him "a sense of freedom" and made him realize how tired he had become of "the act," the silly pomp and luxury that accompanied fine dining; the whole undertaking needed "some rawness." It was also during this time in Girona that a fellow stagaire by the name of Grant Achatz let Redzepi take a look at The French Laundry Cookbook, a text that amazed him: "[Keller] was embracing things that people made fun of... pop culture... the mac and cheese." He asked Achatz to get him into the restaurant for what would be his first visit to the country he knew had given the world Terminator.

The importance of foraging and "discovering the stuff you pass by" took up a large chunk of the proceedings. Redzepi talked about how he usually uses his iPhone in order to pin down locations and take photos of potential areas: "ancient ways with new technology." And he suggested, completely seriously, that New York get hip to it, too: "Why not forage in Central Park?" Chang, who mentioned he had mistakenly tried a poisonous mushroom on an excursion with Redzepi, said that we simply don't have the abundance of natural resources the guys at Noma do.

With Ferran Adriá's recent financial troubles in mind, Reichl asked how Redzepi makes this all pay. The chef suggested that it doesn't, really — that it's all about passion. "Chefs are natural born martyrs... they'd make the best terrorists."

Would he ever serve insects at his restaurant? If he found the right ones, "absolutely."

Will he ever do something affordable, like his buddy Chang does? "I don't think I have the brains for it. Chang makes it affordable and it's fucking delicious." 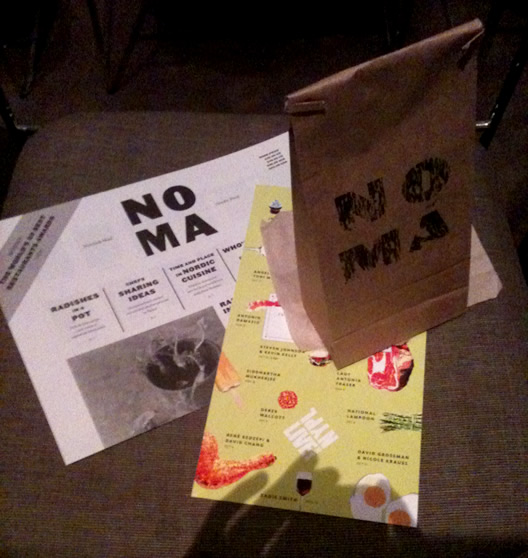 If the preceding paragraphs don't make it clear enough, this was René's night, and Chang was there to back up his pal. His team prepared 300 goodie bags — the brown ones they use at Milk Bar and other Momo establishments — filled with carrots, radishes, herbs, and a wild kiwi from Maine that was absolutely bonkers. Chang also spoke of his admiration for the "execution, discipline, integrity, care, tenacity, and comraderie" of the Noma operation, something he "tries to emulate." He explained how he's sent several cooks to stage in Copenhagen, and that when they come home, they return better chefs and better people. In lauding how his friend has created a local cuisine in "just seven years," Chang dropped a few measured bombs on New York: "We need to find our identity, not just make more of the same... We need individual thinking."

The evening concluded with questions from the audience, the most exciting of which included a plea from a chef for a stage at either Momofuku or Noma. Chang smiled, Redzepi said they'd chat after. The last one, perhaps too appropriately, was what their last meals on earth would be. Redzepi: "a bowl of blueberries and cream with my wife and daughter." Chang: "no comment."