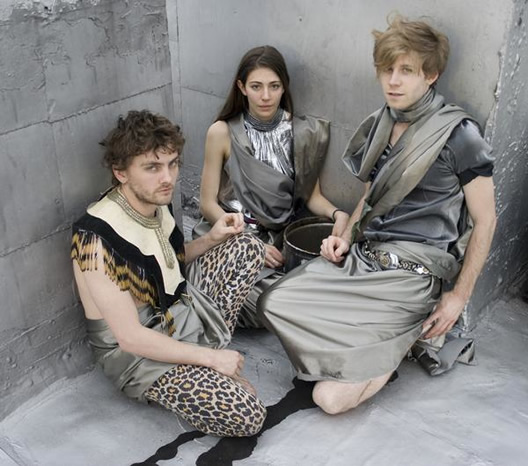 Brooklyn indie darlings, Chairlift, were something of a local treasure after relocating to New York from Colorado in 2006. In 2007 they gained recognition for partnering with the duo Radical Friend to release a psychedelic video for their single, "Evident Utensil." But it was when their single "Bruises" was featured in a popular iPod commercial that the group's catchy electro-pop finally reached the masses. These days, Chairlift can be found touring major festivals and hopping between LA recording studios and their home-base of Williamsburg, Brooklyn. Eater caught up with bassist Patrick Wimberly to find out how Chairlift dines on the road.

Do you guys have any weird/specific dining requirements on the road?
We’re pretty easy to feed.  In general we require the closest, most delicious food possible.  It’s always nice to check out the local spots.  It’s one of the reasons we like traveling.  In general, we are anti-fast food, but every once in a while I can’t help it and I need to eat a Spicy Chicken Sandwich from Wendy’s?

No doubt, the Spicy Chicken Sandwich is a little slice of magic. Fast food is probably tough to avoid sometimes, do you have a favorite fast food chain?
Quiznos.  When we’re the middle of Nowhere, America we’re always on the lookout for a Quiznos.

Who is the biggest 'foodie' in the band?
We’re all foodies, but we’re not snobby foodies.  It’s all about finding the perfect food for your current situation.  Everything has to be taken in to account: location, time of day, funding, etc? If we’re stuck on a bus all day and the only access we have to warm food is a microwave, Bagel Bites can be the perfect solution.  Now if we’re touring the cities of France, we may hold out to get to Normandy to taste the freshest Camembert cheese in the world.  And when we tour in France, our meals are always home-cooked right in the venue.  There’s always a family style dinner with the band, the crew and everyone at the venue.  They usually like to show off their local wines and cheeses.

In past interviews, you all have spoken about the perils of getting sick on tour. Do you have any foods you eat regularly to stay healthy on the road?
Tacos!!! I know that may not sound like the healthiest food, but tacos are morale boosters for us.  Sometimes the most important thing on the road is a healthy morale.

Do you have cities you like touring in specifically because of the food?
Austin, TX.  You already know we love tacos and Austin has some of the best.  We always go to El Chilito.   Sometimes we’ll go there for dinner and may even return the next morning for breakfast tacos and coffee.  There are a few cities where you can go just about anywhere and find a good taco.  New York, L.A., San Diego and Austin (I assume there’s some Mexican cities you could add to that list, but we haven’t done much touring there).  We believe it is important to live in a city with good tacos.

Do you guys ever splurge on a fine dining experience on the road? If so, where was your best and what'd you have?
Yes.  Like I said before, eating is one of the reasons we like traveling so much.  What’s the point if you can’t splurge every once in a while.  One of my favorites splurges was on a Sunday morning in Sao Paulo, Brazil.  My fiancé and I were looking for something yummy and not much was open.  We came upon this seafood place that looked decent.  No one spoke English there and the menu was in Portuguese.  We didn’t know what we were ordering or how much it would cost, but we ended up with this delicious spicy salad and an incredible shrimp soup.  I wish I could remember the name of that place, but it was amazing.

Do you guys ever take your chances on street food in new cities?
Of course.  My favorite street food is at home in New York (gyros!), but I am easily tempted by anything within my smell-range.  If you put your good-smelling treats in my path, I’ll probably eat them.

What local NYC/Brooklyn restaurants/dishes do you miss most on tour?
Diner burger (in Williamsburg, Brooklyn). Diner is always the first place I go when I get home.  Mmmmmmmmmm?

What is your preferred method for finding the choice spots in new cities (Yelp, asking venues, tweeting to your fans)?
I’ve never thought about tweeting fans.  That’s a pretty good idea.  Usually we ask someone at the venue or beg them to feed us.  “Phone a friend” is also a good option?

And now for the lightning round!

Chairlift is working on their second record on Columbia Records. Check out the video for their single "Bruises":