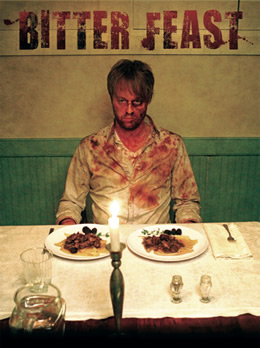 Joe Maggio is the writer and director of the soon-to-be-released horror film, Bitter Feast. We've written about it here before, but the premise follows: A self-serious television chef, Peter Gray, loses his restaurant and television show due to a scathing review by a misanthropic and irresponsible blogger named JT Franks. To seek revenge, Gray kidnaps Franks and systematically brutalizes him using a combination of violence and cleverly sadistic "food challenges." It's a mix of Michael Haneke's Funny Games and Campbell Scott's Big Night. Food hasn't been used this sadistically since Titus Andronicus. I recently spoke to Maggio about the inspiration behind the film [Hint: Frank Bruni] and how he roped Mario Batali into a cameo.

When does the film come out?
They're doing a one-week run at the Rerun Gastropub in DUMBO starting on October 15th. They are going to be serving food from the movie while you're watching the movie.

It's not exactly an appetizing film.
That's true. What I wanted to do with the food in the movie is to have always these incredible ingredients — all farm-fresh, organic, no hormones — but to make it disgusting. When Gray is mixing up that ground beef with the bread crumbs and herbs and the farm-fresh eggs and everything, it looks like he's mushing shit around in a bowl. Those chickens were all free-range and cage-free, but when the knife is going through the spine, and you hear that hollow crunching cavity sound, I wanted it to be repulsive in a way.

I've read that you were inspired by the Frank Bruni review of Gordon Ramsay's The London Hotel.
I don't know if you remember when it came out, but people were very curious about Ramsay. It was his first New York adventure and I think a lot of people wanted it to suck, just given Ramsay's reputation as being this psychotic, totally awful human being on his show. I just got this sense that people were waiting for him to fall on his face. I just want to preface this by saying I was a big Frank Bruni fan and he gave London Hotel a decent review but at one point, he writes, " The restaurant fails to deliver the most important thing of all: excitement." That's the kind of thing you say to a friend after a few drinks and it's kind of pissy. But in a review in the New York Times to condemn a restaurant for lacking excitement is pretty weak tea.

And you know Gordon Ramsay hasn't done as well since.
He hasn't. And I thought as a filmmaker, as somebody that does get reviewed — and I've gotten negative reviews — I can take the worst review anyone can give me as long as it is not silly. But I thought that was lazy and silly.

On the other hand, Gordon Ramsay, for whom you feel such sympathy, has himself been accused not of silliness but of cruelty. The latest example is, of course, the New Jersey chef who committed suicide after appearing on Kitchen Nightmares. Ramsay's not exactly a likable antagonist.
Peter Gray is certainly is easy to dislike in many ways. But I wasn't trying to create a Gordon Ramsay cartoon character. I was trying to take a television chef who was somewhat unlikeable. What I tried to show is that cooking in this meticulous way is what kept Peter Gray's powder dry all these years. He's doing the best he can to keep his shit under control, and this guy — the blogger JT Franks — pushes him just a little bit too far. Like I said, I worked in television, I know all this stuff is scripted, so who knows if Gordon Ramsay is that unlikeable? But he goes along with it and does obliterate people on camera.

The film to me had this Dantean aspect. In the Inferno, Dante calls it contrapasso, that each punishment is tailored to the exact sin committed. So Paolo and Francesa are eternally burning in flames since their crime was lust, while sorcerers are forced to walk with their heads twisted around their bodies. Similarly, Peter Gray reads Franks' reviews back to him as he forces him to, for example, make the perfect egg over easy.
Exactly. You're the first person who has remarked on that. Dante must have thought long and hard about what was the apt punishment that would not only be a punishment but lead to an understanding of the sin committed. That's what I thought was key. It wouldn't be enough for Gray to just be the cause of Franks losing his job because Frank's doesn't give a shit about anything. He's got to make him care. He wants the punishment to come with that understanding. And that's the gist of all those food challenges and that part of the movie. This isn't just about inflicting punishment. It's about making someone care.

I find it funny and a bit insulting that you chose to make Franks a blogger as opposed to a print critic, even though it was Bruni — a print journalist — who inspired you.
I thought the blogger was more timely. More and more people are getting their news and opinions from blogs. I tried to make Franks more higher-end. He's not just some guy writing out of his basement that five people log on and check out. He's a big of a cultural phenomenon. He can't just print anything. He's at that place where his opinion is almost news.

I hear what you're saying but that seems to me to describe more a print critic, like Bruni. I can't think in the blogosphere of someone who has the weight of a Times critic in the food world. Who did you look toward for inspiration?
One guy, a guy who writes for the Sunday Times in London, A.A. Gill [Ed Note: a print journalist] who is Franks basically. The reviews are so savage and so cutting. It's so much more about his prose style. You get the sense the guy does not give a shit about the havoc his writing wreaks. Franks is a guy who wants to be writing fiction but he can't bring himself to do it, so this is his outlet. He sort of hints at this: He thinks that everyone is like him, that nobody gives a shit, that Peter Gray's whole organic thing is just a shtick when it isn't. For Franks, he feels it's all just a game, like professional wrestling. He's the good guy and I'm the bad guy, but we're both on the same side. That's a really cynical way of looking at the world.

How did you get Batali involved?
I wanted Batali and it just so happens that our producer Larry Fesenden's son goes to school with Batali's son. When he goes to drop off his kid, Batali is there sometimes. One day he just approached Batali. People that work in the food industry — not in food criticism — are very interested in the film. They like the idea. They think it is fun. I put Batali up there with Ingmar Bergman. He's a poet of the stomach.

And poet of the stomach who got four stars from a Times critic. You also take aim at the Food Network. One of the early scenes involves Peter Gray haranguing his bimbo sidekick.
I have a lot of friends who work on Food Network shows. They helped me. A lot of my friends do all the Bobby Flay Throwdowns. I'm actually doing some writing for Charlie Pinsky, he did Spain: On the Road Again. We're doing one now with Jean-Georges [Vongerichten] and his wife, who is half-Korean, to discover her roots.

So, who was the vacuous blonde sidekick based on?
Who do you think? Rachael Ray.