Share All sharing options for: Food & Wine's 40 Big Thinkers 40 & Under 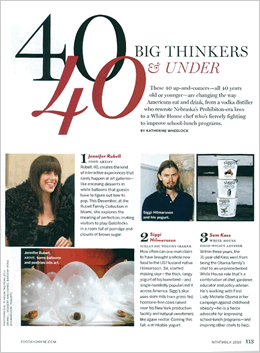 From the November issue of Food & Wine magazine comes the feature 40 Big Thinkers 40 & Under that eschews the olds and celebrates youthful idealism (and artisanal soy sauce making?). Says Food & Wine: "These 40 up-and-comers — all 40 years old or younger — are changing the way Americans eat and drink, from a vodka distiller who rewrote Nebraska's Prohibition-era laws to a White House chef who's fiercely fighting to improve school-lunch programs."

1) Jennifer Rubell, Food Artist: Rubell, 40, creates the kind of interactive experiences that rarely happen at art galleries -- like encasing desserts in white balloons that guests have to figure out how to pop.

4) Zach Brooks, Food Blogger: Four years ago, the 34-year-old launched his Midtown Lunch website in Manhattan with the belief that a tasty, $10-or-less lunch is every worker's inalienable right.

6/7) Brett Beach and Tim McCollum, Bean-to-Bar Chocolate Makers: After doing volunteer stints in Madagascar, Beach, 35, and McCollum, 33, returned in 2008 to found Madecasse, a chocolate company in which every step of the process - not only cultivation but also packaging and distribution - is done locally.

8/9) Geoff Bartakovics and Nick Fauchald, E-Entrepreneurs: Bartakovics (33) and Fauchald (31) founded Tasting Table as a food e-newsletter that scouts trends and discovers up-and-coming artisans, like a new charcuterie maker in Wisconsin.

11/12) Michael Kirban and Ira Liran, Coconut Water Popularizers: In the span of a few years, childhood friends Kirban, 35, and Liran, 32, took coconut water - a super-nutritious, low-calorie drink - and turned it into Vita Coco, the biggest company in the category, with celebrity investors like Madonna.

17) Matthew Cain, Eco-Wine Importer: Each carton of Yellow+Blue wine Cain (40) sells has a carbon footprint half that of the average bottle.

19) Kenji Lopez-Alt, Food-Science Whiz: An MIT grad and chef, Lopez-Alt, 31, has earned a fanatical following for his blog, the Food Lab, by demystifying cooking techniques like sous vide (his version involves a plastic cooler) and cheerfully creating a homemade In-N-Out burger.

20) Frances Ro, Housewares Hunter: Since taking over her father's Los Angeles-based importing business and department store a few years ago, the 34-year-old Ro has brought incredible new kitchenwares to the US - everything from stellar pressure cookers and pots made by 165-year-old German company Fissler to ingenious soap-conserving sponges from the Japanese company Goodbye Detergent!

21) Charles Bieler, Wine Collaborator: A visionary marketer and compulsive collaborator, Bieler, 35, takes what could be pure gimmick - selling good Cabernet in a screw-top jug, for example - and turns it into a bona fide opportunity for worthy wines.

22/23) Chris Parachini and Brandon Hoy, Locavore Leaders: Parachini, 38, and Hoy, 33, founded Roberta's not only as a Brooklyn restaurant but also as an incubator for other locavore projects. These include the biggest rooftop farm in NYC, plus beehives, greenhouses, a radio station and an artisanal bakery.

26) Minh Tsai, Soy Artisan: Compared to processed tofu, the artisanal kind has an entirely different flavor - and Tsai, 39, is on a mission to prove it. He began selling his fresh-that-day tofu at the Palo Alto, CA farmer's market in 2004.

27) Amanda Hesser, Cookbook Author: Hesser, 39, didn't just update the 1961 edition of The Essential New York Times Cookbook; she excavated more than a century's worth of recipes from the newspaper's archives for an account of the evolution of American cooking.

28) Matt Jennings, Chef and Cheesemaker: Lots of chefs make their own ricotta or chevre, but few have gone as far or as deep as Jennings, 34. Not only does he run an excellent cheese shop (Farmstead) and a bistro (La Laiterie) in Providence, Rhode Island, he also regularly collaborates with small farms on experimental cheeses.

30) Tracey Brandt, Urban Winemaker: By experimenting with novel techniques - like making wine using grapes growing wild on abandoned vineyard land - Brandt, 40, and her husband Jared, are helping to change the way wine is made.

31) Rob Cooper, Spirits Inventor: A third-generation distiller, the 33-year-old Cooper is one of the most influential spirits makers in the country. His deliciously subtle St. Germain elderflower liqueur - made with petals picked by hand each spring in the French Alps - permanently altered cocktail menus at bars everywhere.

32) Christian Ettinger, Organic Brewmaster: Portland, Oregon, has long been known for both craft beer and eco-consciousness. Now Ettinger, 37, is combining them: The former brewmaster of Laurelwood, he launched his own organic craft brewery, Hopworks, in 2008.