Next Iron Chef Season 3 Premiere: Dust in Your Eyes, Sand in Your Mouth, Blood in the Water

Share All sharing options for: Next Iron Chef Season 3 Premiere: Dust in Your Eyes, Sand in Your Mouth, Blood in the Water 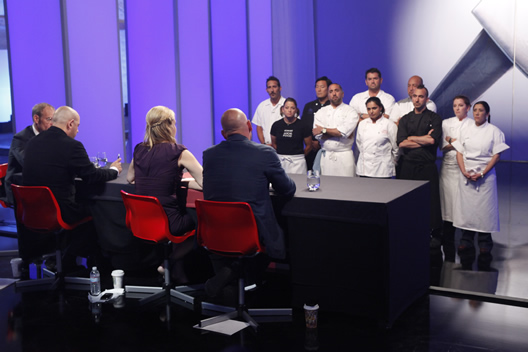 Long after the sun had set on the East Coast, the third season of The Next Iron Chef began in a sunny California backlot. Building on perhaps the defining trope of food reality television, there was a great deal of graphics incorporating knives slicing through the air with hyperbolic whoosh. Unlike in Top Chef, wherein the knife penetrates the empty space between the two words, in TNIC, the two knives swoop together to form the "X" in Next. One hope this augurs well, indicating that perhaps in this show  — more than others — technique and food will be well integrated into the narrative. One was right.

The chef contestants, as we noted earlier, are heavy-hitters. I was surprised to see both Marco Canora of Terroir and Hearth and Marc Forgione of Marc Forgione there, but the biggest surprise was Ming Tsai, nominally of the restaurant Blue Ginger but in reality best known for his ubiquitous presence on television shows, on supermarket shelves and Food Network events. The man is a ronin of the celebrity chef circuit — aimless, perhaps — but well known. To an observer, it seems that the next Iron Chef seat is his to lose. 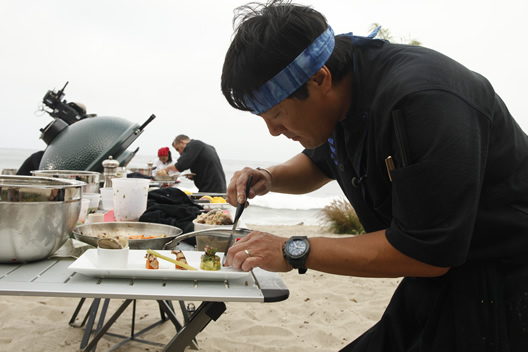 In fact, if he was merely arbitrarily named next Iron Chef, I know not who would object. This isn't because of his stellar technique — of which I am not entirely convinced — but rather because he fits the classic mold of telegenic media-savvy "personality." However, seeing him compete with the hoi polloi undermines that assumption (rightly). The only way for Tsai not to come out of this season without taking a serious hit to his credibility is to win the entire thing. This — the sound lot, the lights, the drama — is his bed and if he can't lie in it, he'll be a sad Tsai indeed. For him, therefore, it's a high-stakes game and it's a good thing he brought his bandana.

Aside from the obvious kitschery of the opening sequence, the faffing about with sliding doors and strange almost Mametian syntax of the "Chairman" and "Alton Brown" the show really is mostly about food. Mostly. There are a couple of red flags. That the contestants had to judge themselves for the first challenge indicates a contempt for the rule of law (although since it was the first challenge, the argument could be made there was no precedent to break.)

Also, it led to a hilarious exchange between the exceedingly unlikeable Duskie Estes and a rather stern moralist Alton Brown wherein the Ms. Estes, after already securing a victory, voted her own sandwich her favorite sandwich much to the dismay of Brown and the viewer at home. 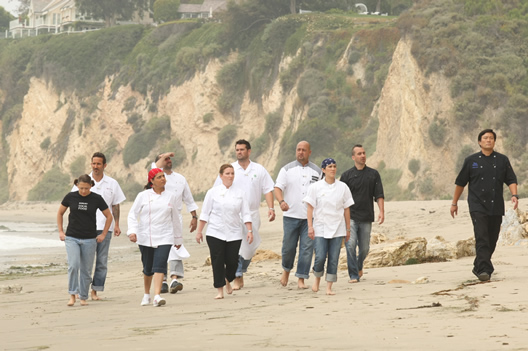 Then everyone headed to the beach. Shoes were shorn and a challenge involving Big Green Egg — a Kamodo-style smoker/grill — and one ingredient happened. A note about the BGE: They're amazing devices. Mine is one of my treasured possessions and so overcome with rage as I was to see them so horrendously misused nearly ruined an evening set aside for television watching and bonding as a couple. No one knew how to use them which, for what it's worth, is less the fault of the contestants and more of the producers who must not know the care and skill with which a BGE must be used for optimal results. All that notwithstanding, let's consider the judges: 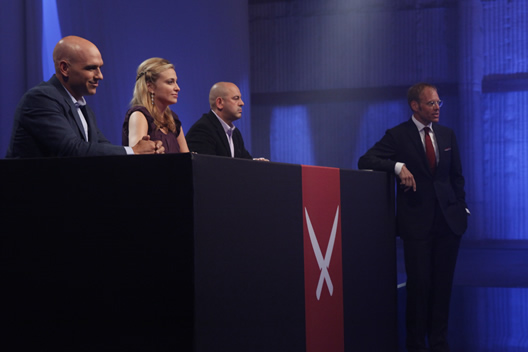 Donatella Arpaia, whose restaurants in New York now generally are considered accursed, is a judge. A bald man from England is also a judge. He let slip like a fart of pretension only one belabored bon mot — "It doesn't last any longer in ones memory than it does in the colon" — so he's okay in my book. And Michael Symon who also was just a good guy all around. But Donatella! WOOF! She is not somebody who I think is awesome, based purely on lack of decorum, class, and balanced criticism during yesterday's show. It should also be mentioned that she was very harsh on Marco Canora. Marco Canora is her direct competitor in New York's demi-haute Italian cuisine scene. Arpaia should have recused herself. 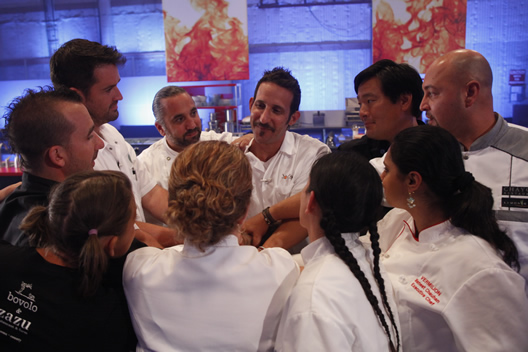 In the end, because all recaps and all shows must end sometime, a wet blanket of a guy named Andrew Kirschner got sent home. His sin? His duck wasn't properly cooked – too much fast left unrendered — and his dish wasn't sufficiently ingenious. I would have preferred Dookie Estor went home. Her ingredient was pork and she only used two small cubes of pork in the entire dish and fucked those two cubes up. But, I'll live. That there was so technical and so precise a reason for Kirschner's dismissal made it palatable and left me, for one, excited to see who and for what would next week's chef be awkwardly dismissed with a tagline that applies to 99.9999% of the world: "You will not be the Next Iron Chef."