Share All sharing options for: The Mechanically-Separated Chicken Photo

So a lot of blogs have been posting this gross photo of what is supposed to be mechanically-separated chicken lately! It started with Buzzfeed picking up the photo from a tumblog that didn't via the source (Gizmodo and Geekologie picked it up as well). The process to get at this chicken slurry is pretty freaky though. Time to quote Wikipedia!

So where's this picture from? It's hard to tell. The photo is on Flickr, dating back to January 2009, but cites Wikipedia as the source. Wikipedia, in turn, pulled the image because "the copyright status is unclear."

The photo even landed on the Cheezburger network website Totally Looks Like (uncredited of course), comparing it to strawberry soft-serve: 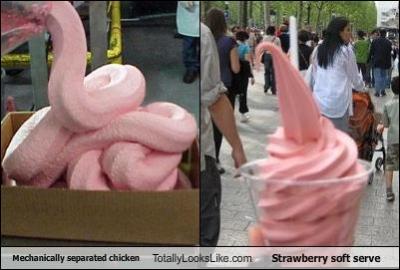 Anyway, there's your photo of mechanically-separated chicken. Want to see a video? Yeah you do!