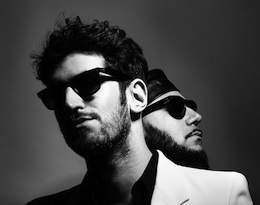 Canada's electro-funk duo Chromeo can be heard everywhere from clubs to video games to shampoo ads. In 2004, they re-enlivened after-hours listening with silky jams like "Fancy Footwork" and the global hit "Needy Girl." Their synthy tracks have been remixed by Bloc Party and dance DJs the world over and, needless to say, Chromeo's Dave 1 and P-Thugg find themselves on the road most of the year. I caught up with synth/talk-box whiz P-Thugg to see if Chromeo likes their food as funky as they like their beats.

You have a varied background: Italian, Lebanese and you currently live in Montreal?
Yes, I live in Montreal, was born in Lebanon to a Lebanese father and a Lebanese-Italian mother. I grew up eating mostly Lebanese and Italian food, my grandmother is a strong Italian woman and forced me to speak Italian and she taught me to cook some pretty mean pasta.

Your Wikipedia line that says Chromeo is "the only successful Arab/Jewish partnership since the dawn of human culture" seems to come up in every interview. Are you and Dave 1 (guitarist/vocalist) as aligned when it comes to food?
Of course, we agree on everything! Though Dave became vegetarian and I'm not, so that keeps him from eating a lot of the same things?.but he will stray for some really good Texas meats or some good Montreal-Portuguese chicken. We have the same tastes but I don't like high-end really snobby restaurants because all they really do is innovate and it's not always good. It's never really authentic and I feel like before you do fusion food you need to learn the basics.

I went to Montreal for the first time recently and tried a 100% legit serving of Canadian Poutine?
Our local delicacy! But Poutine is not actually Canadian, more specifically it's from Quebec and the rest of Canada is not really into it. But in Quebec they even have Italian Poutine where they replace the gravy with marinara sauce.

Since your second album, "Fancy Footwork," you guys have been touring the world playing festivals like Japan's Fujirock and Lollapalooza in the U.S. Which festivals have had the best food?
Coachella had good food but we played this summer at the Montroga festival in Switzerland, it's like a classic 70s jazz festival. But the catering there was insane, I've never had that much food catered in my life. Curry, cakes, amazing beef stew and local cheeses — amazing! VirginFest in Baltimore had really great food too, definitely in the top five.

Do you guys have a favorite U.S. city you dig for the food?
Before the summer tour I think L.A. and San Francisco were our favorite cities, especially Fisherman's Wharf in San Francisco with fresh crab and stuff. But after going South to Austin and Dallas — that's the new spot. There's this place in Dallas called "Off The Bone" that is really just??.just??off the bone! It's amazing, the BBQ there is great and in Austin it's ribs from Stubbs BBQ of course.

So is Texas where you've had your best dining experience to date then?
No, I think it was when we went to Brazil. I mean Europe is something else, when you tour Europe you always eat well, period. Paris, Barcelona, London's Indian food are some of the best. Yeah and in Manchester they have this huge Indian section where they make some of the most amazing Balti Chicken and what's cool is that you can only get it in England because that's where it was created. You can't even find it in India, it's amazing.

But to come back to our best experience: we went to Brazil at the end of August and made some friends who took me to some local restaurants where they make their typical dish, the feijoada which is beans and marinated meat. They also have this weird version of the Poutine that they make with yuca fries, minced meat, and this cheese that tastes like parmesan with oil and spices. It's SO good. And on the table there they serve everything with a bottle of melted butter. They put it on everything freely, and you're just like are you serious? And they just go nuts with the stuff.

Well maybe that sets us up really well for the next question then: you guys have a great sense of humor when it comes to your lyrics and song titles, so if you could sum up Chromeo's sound in one food or meal what would it be?
Poutine with melted butter of course! Actually let me say the best version of the Poutine: it's called Galvaude. What a Galvaude is a Poutine with fries, gravy and cheese curds but you add chicken and green peas — so that's the real answer to your question.

So I've heard a lot about Quebec fast food chains like: La Fleur & Harveez, do you guys ever hit fast food on tour and if so, do you have any favorite chains in the U.S.?
Oh yeah, Le Fleur is for Poutine and hot dogs and a grape juice and that's their meal, but it's really really heavy. But Harveez is great for hamburgers. In the U.S. it's all about In & Out.

Do you go 'Animal Style'?
Oh yeah, and even on the fries! That's the only way to do it. I'm trying to learn all the new off-menu language, like the one where they cook the meat patty with mustard on it, I think it's called Dutch Style?

And now for your top picks!

Top Burger in US: In-N-Out

Top Pizza in US: Maria's in Brooklyn, NY

Top Taco/Burrito in US: The Standard Hotel Restaurant in Hollywood, CA

Check out their latest single, "Don't Turn The Lights On" :

Chromeo's Dave 1 recently took a walk down memory lane at his favorite diner in Montreal: