Share All sharing options for: Craft Beer Goes Global: It's Big in Italy 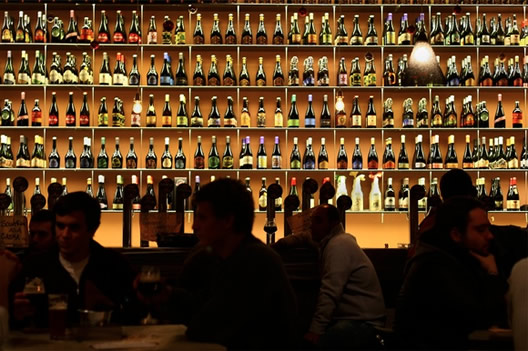 Today the craft beer scene is thriving in some very surprising places—even Italy. A couple of weeks ago we touched on Japan's hearty embrace of the small artisan brewery approach, with which West Coast IPA's and other beery innovations continue to open new eyes and tastebuds accustomed only to standard fizzy lagers. Countries that once had just a few national brands of industrial, pale lager are now awash with choices of idiosyncratic beers in a swath of styles, both homegrown and increasingly imported from the US. Stone Brewing Co., of San Diego, is even considering opening an American craft-style brewery in Europe, a development some Europeans must still find wildly implausible.

According to the Brewers Association, the craft beer industry's trade group, the numbers don't lie: as of 2009, U.S. craft beer international sales are up nine percent by volume with some markets showing export increases of more than 25 percent, with at least 1.4 million gallons of American craft beer heading overseas. Once known only for Budweiser, the U.S. is slowly, but surely, gaining notice for revolutionizing beer completely.

In Italy, the birthplace of good wine and "Slow Food," homegrown craft beer is suddenly hot (and more on this when Eataly opens its own brewery, completing the beer garden at La Birreria, in NYC, later this year). There are some 150 small breweries in the country now, concentrated in the mountainous North. And Italians, famously prideful about their food and wine, have decided, against considerably long cultural odds, to give this newfangled beer a chance. Piedmont, outside of Torino; and Lombardy, north of Milano, near Lake Como, are the two gravitational centers of Italy's new craft beer resurgence.

Forget the pale lagers of Moretti, Poretti, and Nastro Azzurro: these are beers that stand up to bold flavors, being boldly formulated themselves. At Le Baladin, in Piozzo, Piedmont’s rock-star brewer Teo Musso uses odd ingredients in beers like spicy Nora (made from ginger and myrhh) and hosts beer dinners at his hotel-restaurant, Casa Baladin. He recently opened Open Baladin, a new beer cafe in Rome's Campo Dei Fiori neighborhood, which is turning some heads.

But you don't have to go to Italia yourself to drink great Italian craft beer. Many interesting brews are making their way here, and a trip to one of the better beer-endowed Whole Foods bottle shops or a local craft beer store should be fruitful.

Still better: Try some Italian craft beer at an accomplished, beer-friendly Italian restaurant. Portland's Nostrana — which recently celebrated five years under the watchful eye of the ebullient Cathy Whims (a 2010 James Beard finalist for Best Chef in the Northwest) — has made local and imported craft beer a focus.

"Italians take great pride in craft beer," says Douglas Derrick, Bar Manager of Nostrana in Portland. "Most Americans think crisp, pale lagers when they think Italian beer, when in fact there are a lot of quite complex craft beers being produced in Italy, but they're just flying under the radar. What I'm trying to do at Nostrana is introduce guests to these beers and show them just how food-friendly they are. I'm blown away by the quality. A great Italian craft beer can rival a great glass of Italian wine."

Recent additions to the list include birre artigianale like Birrificio Grado Plato Chocarrubica, a velvety-smooth 7% oatmeal stout made with Venezuelan cacao beans and Sicilian carob, and Malthus Birolla, which is made with Italian chestnut and thorntree honey and roasted chestnuts, a fulsome, fitting brew for fall.