Why Do We Tip Servers? From Steve Dublanica's Keep the Change

Share All sharing options for: Why Do We Tip Servers? From Steve Dublanica's Keep the Change

. Courtesy of the publisher, we're giving away five (5) copies of Keep the Change. To enter, simply follow Eater on Facebook and we'll select winners at random.* 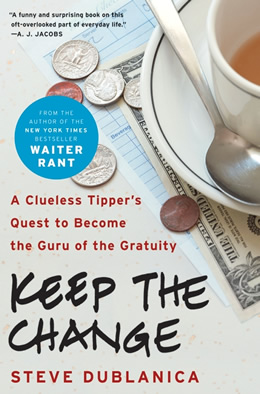 So why do we pay extra? Why do we tip? I was a waiter for almost nine years and, to be honest, I haven't got a clue. But after slaving in the restaurant trenches there's one thing I do know: quality of service has almost nothing to do with the tip a server receives. Any waiter whose IQ hasn't been lowered by alcohol and Quaaludes will tell you that there's no rhyme or reason as to why some customers tip and others don't. I could give one patron incredible service and get two pennies, while with another, I could get his order wrong, insult his heritage, leer at his wife, make fun of his kids, and still get 20 percent. Customers who looked like they had scads of money used to stiff me, while people with dirt under their fingernails and bad manners would give me the best tip of the night. If tips were based solely on the quality of service, waiters would have gone extinct long ago.

According to a Zagat survey, 80 percent of Americans prefer leaving a voluntary gratuity instead of paying a fixed service charge because they believe tipping offers an incentive for waiters to provide good service. They believe that "extra" they're paying rewards the quality of the service they receive. But that's not actually the case. There is a correlation between service quality and tip, but that correlation is very small. How small? After studying customers' tipping behaviors extensively, Dr. Lynn came up with this statistical gem. "If zero means no relationship and one means a perfect relationship," he said, "then the correlation between service and tips is 0.2. A lot closer to zero than to one." Having flunked statistics in college, I asked Lynn to dumb it down for me. "Put another way," Lynn said, "service has no more effect on the tip than how sunny it is outside."

I know, I know. Right now you're shaking your head and saying, "If the service is good, I tip. If the service sucks, I don't." But that's not what happens. In 1997 two researchers named Bodvarsson and Gibson surveyed five restaurants to see how Service quality affected tips. After they crunched the numbers, they noted that the customers who ranked the service highest increased their tips by only a measly 0.44 percent of the bill. When you're a waiter, that's chump change. And it tells servers that no matter howhard they hustle, their service has a negligible effect on their tip.

Of course some studies argue that good service Increases tips. In one 2003 study, researchers asked customers to rate servers on a service scale of 1 to 5. They found that each point on this service scale increased a waiter's tip by 1.49 percent of the bill size. Restaurant patrons used this scale to score servers in five areas: appearance, knowledge, friendliness, speed of service, and attentiveness. Speed and friendliness added to a waiter's tip percentage, but appearance and attentiveness had no statistically significant effect. And a server's knowledge actually reduced his tip, causing Israeli economist Ofer Azar to note in his paper "The Social Norm of Tipping: A Review," "The latter result is surprising, as it suggests that diners tip less when they consider their waiter more knowledgeable."

I think Azar is on the money here. Despite the fact that I knew my restaurant's menu like the back of my hand, many of my customers got annoyed when they realized I knew more about the food than they did. And whenever I gently corrected a customer when he or she mispronounced a menu item, my tip was sure to go south. I guess some people want their waiters speedy and friendly but distracted and stupid. I attribute this aggravating effect to the thousands of "foodies" spawned by that marketing colossus called the Food Network. After watching chefs such as Bobby Flay, Mario Batali, and Emeril Lagasse work their considerable magic on the boob tube, these culinary geeks automatically assume they're culinary experts.

The Cult of Liquid Death