Paul the Psychic Octopus Passes Away

Share All sharing options for: Paul the Psychic Octopus Passes Away

Paul the psychic World Cup match-predicting octopus who was offered "movie and book deals and acquired a talent agent" has passed away. The German cephalopod predicted the results of games with 100% accuracy and caused quite a stir! When Paul correctly predicted that Germany would lose against Spain, the German people turned on him and demanded a revenge grilling. His aquarium even received death threat recipes.

Paul the psychic octopus saved his brethren, too: Chef and Spaniard José Andrés promised to take octopus off all his menus if the prediction of Spain winning came true, and it did.

And now, a goodbye message to Paul: 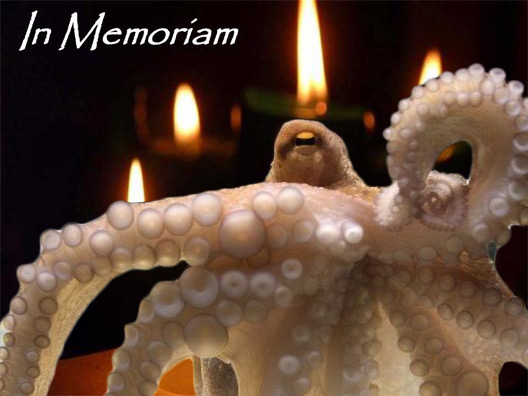