Chefs Ferran and Albert Adrià announced two new projects in Barcelona, Spain: Tickets, a tapas bar, and 41º, a cocktail bar. A joint project with the Iglesias brothers (Pedro, Borjam and Juan Carlos) who run the landmark seafood restaurant Rías de Galicia, Tickets and 41º will be located in the Flotats building in the mostly residential neighborhood of Parallel, "the cradle of the theatre and cabaret in Barcelona."

Tickets' website describes it as "a contemporary tapas place, an evolution of traditional tapas" and 41º as "a classic cocktail bar with an exciting gastronomic offer full of creativity with no limits for imagination." 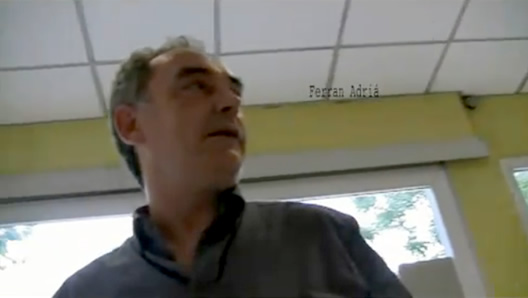 According to the press release, Tickets will have a 130-foot facade displaying the cultural timeline of the history of tapas. Composed of multiple bars, one will serve traditional tapas, another drinks, and another will offer more modern food that will "give free rein to creativity."

There will also be a grill and a desserts bar serving "magical desserts in Wonderland." There's also a "a little space for swine and rogues" who will "be the ones to receive the clients who enter the place and they will also make flattering comments, as Romeo to Juliet, to men and women who deserve it." The press release elaborates:

For us, la vida tapa is a global concept which links gastronomy to a way of understanding life. A funny way of eating that turns the eater into an interpreter of a theatre play, of a chorus magazine, of a circus variety, being the character of a fairy play. A staging of real life. At la vida tapa there is no place for boredom, sadness or loneliness but there is much for laughs, complicity and good company.

The expected opening date of Tickets is January 11th, 2011.

41º is described as "a magnificent volcano of creativity, ideas and hopes." Offering both "conservative," classical cocktails and more modern, contemporary ones, 41º will also serve "classical" snacks by Albert and Ferran "suitable to have with our cocktails" including Parmesan ice cream, Iberian ham Airbaguette, and spherical Minimozarellas. "We think that cocktails will become more important in the Barcelona gastronomic offer," says the press release. 41º is expected to open at the end of November.

They also have a bunch of videos in which they show the space and talk theory, but it's all in Spanish, so your mileage may vary.