Next Iron Chef, Episode 4: All Is Fair in Love and War

Share All sharing options for: Next Iron Chef, Episode 4: All Is Fair in Love and War 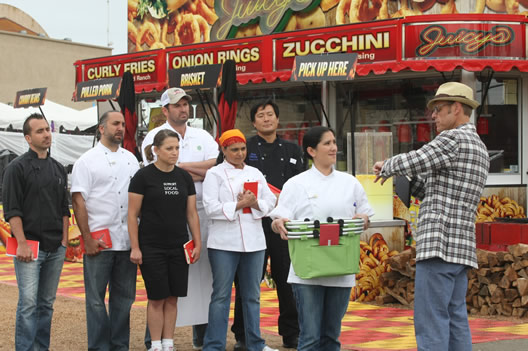 Last night a morphological battle raged at kitchen stadium. Wills were tested and bent. Definitions debated and mayonnaise made into pudding. At the root of the dispute, what does "transformation" — the guiding word of the episode — mean? Does it, as Chef Maneet Chauhan asserts, mean "fundamentally changing what the [original] dressing is" or must that original ingredient be recognizable, the position taken by the baby-faced sex machine Marco Canora as he threw Ming Tsai under the bus (as he always does). Note to Tsai: Stay under that bus, my friend. You know you'll end up under its wheels again soon. 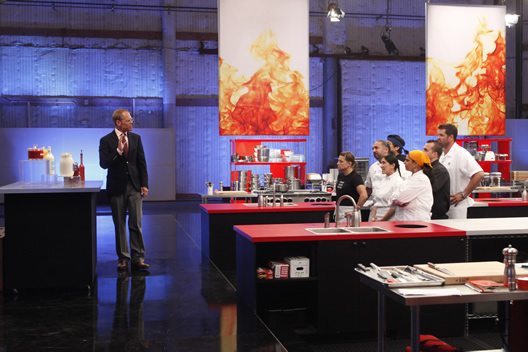 As the chefs were tasked with turning condiments into not condiments, I'd have to side with Chauhan. Even as she failed to make ranch dressing appetizing, she grasped the essence of transformation. When a caterpillar becomes a butterfly, emerges from the chrysalis wings wet yet radiant, we don't fault it for no longer being a land-lubbing caterpillar. The same is true for ranch dressing.

Laboring a mistaken assumption Canora wasn't convinced by Tsai's transformation of steak sauce — "The sauce was the steak; the steak was the cheese; the cheese was the sauce," explained Tsai — because the original steak sauce was unrecognizable. It was like a pyramid scheme but not a delicious one. I wasn't convinced of Canora's transubstantiation of mayonnaise to chocolate pudding. Hellman's to Canora: This is my body. This is my blood. Anyway Tio — who turned hot sauce, which she hates, into ricotta, which we all love — won. Duskie Estes who turned mustard into something called mustardfruit which no one liked, lost. 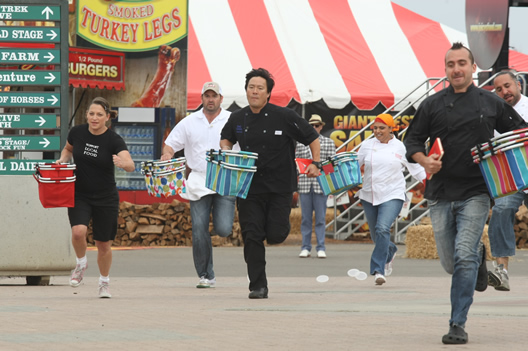 Then they went to the San Diego Fair at the Del Mar Fairgrounds to try to transform fried shit into good food. I've been to that fair, many times. The best thing there, I remember, were brown paper mystery bags from the Mineralogy Pavilion you could buy for $5. Sometimes you'd get petrified pine cones, sometimes Tiger's Eye, sometimes geodes. It was great.

The worst thing there, other than the Port-a-Johns, was the food. The wretchedness of the former, I think, begat the wretchedness of the latter. But that was the challenge set forth by Alton Brown in his creepiest carnie outfit. Chef Tio got five minutes extra. The rest had thirty minutes to ransack the clearly stocked-for-TV stands. I can tell you, in non-TV land, nothing that enters the San Diego Fair does so without undergoing hours of processing, packaging and shipping.

They became Transformers. Canora tries to make shit healthy; Tsai tries to make shit complicated; Tio tries to make shit pop; Estes tries to make shit local (ha!); Caswell makes a corn into a Snocone and frogs' legs to wings; Forgione makes a float and Chauhan makes a patty. That girl loves patties. She'll turn anything into a patty. I bet she has a bumper sticker on her Camaro: "Let's Get This Pattie Started!" Tsai tells Donatella Arpaia to suck hard on his straw, which has all the ingredients of a banana split. Um, I can't believe that works but it does! She sucks. Sadly, Tsai's unguent is unsatisfying. 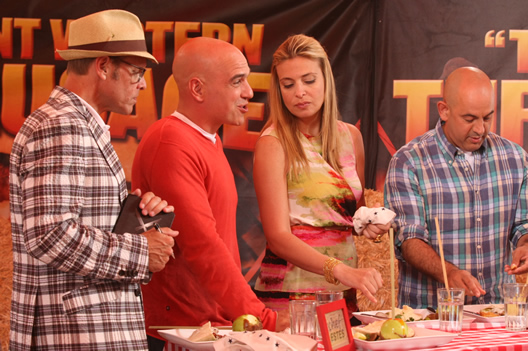 What becomes clear as the chefs toil and trouble is Tsai's lack of focus might sink him and Chauhan's lack of imagination is her biggest liability. Caswell, though talented, might be slightly outpaced by his own ambition. Tio is hit or miss but mostly now hitting. Canora and Forgione are both strong competitors. Duskie Estes is a hapless fool. She can't make caramel. She lies when she needs to. ["The dough was cooked but I forgot to tell you there was almond paste inside." Really, lady?] She's a sophist and she needs to learn words alone can't transform shit to Shinola. But ultimately, it was she who made the biggest and the best transformation of the show. She went from being there to being gone.