Television chef and restaurateur Bobby Flay, fresh off his People's Choice Award at the New York Wine and Food Festival, recently announced plans to expand his burger chain Bobby's Burger Palace by 12 to 14 locations over the next 12 months.

While the upmarket burger business is getting crowded (see Shake Shack's recent expansions), Flay remains confident. He said, "I feel we have an advantage. When I open a restaurant, people come... That doesn't mean they'll like it... It doesn't guarantee anything, but it gives us a shot."

Back in May, Bobby Flay accused Applebee's of "copying" his menu concept of regional American burgers. Which was somewhat laughable!

But now Flay is getting the law on his side to protect his intellectual property. Or at least the identity: Flay has trademarked the terms "Crunchburger" and "crunchify" — the practice of "adding a handful of potato chips between the burger and bun." Flay said "that his company has had to notify some competitors" that he owned the trademark, which we assume means he had lawyers send cease-and-desist letters to prevent other companies from using those terms. "We didn't invent it, but we did trademark it," said Flay. 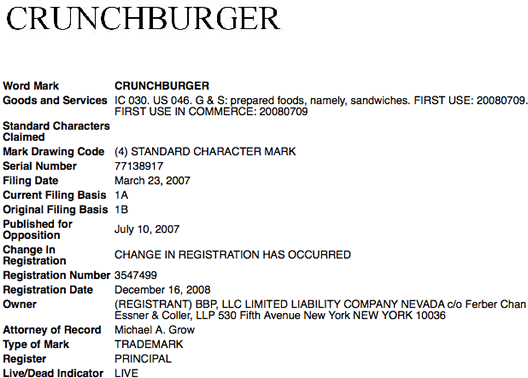 A search of the United States Patent and Trademark Office database doesn't come up with "crunchify," but we did find a trademark for "crunchburger" filed in 2007 by "BBP, LLC."

There are similar — if carefully-named — sandwiches out there though: A&W has the "BBQ Bacon Crunch" (with fried onions). KFC had what was called the "Double Crunch Burger" (made with "extra crispy white meat chicken strips") but is now called the "Double-Crunch Sandwich." Perhaps they have been contacted by Flay's lawyers?

Meanwhile, The Cheesecake Factory has a "Double Cheese Crunch Burger" on their menu (with "Crunchy Potato Crisps").