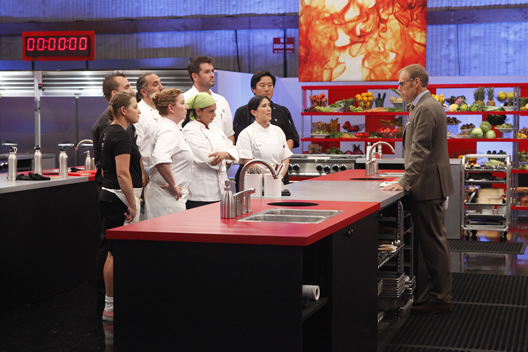 After a long and difficult but ultimately successful day of football-watching (at least for New York sports fans) I welcomed the whooshing of the great floating knives and the self-seriousness of Alton Brown which heralds the beginning of the Next Iron Chef. We're in episode three. Already I've forgotten who went home last week. Thus is the sad future that awaits all but one of these contestants.

In fact, I wouldn't say I remember last night's episode very well either. The dawn and the intervening night have washed clean the slate of my memory. But from the faded blurry traces, resembling more an impressionistic tableau than a Turner landscape, this I know happened: 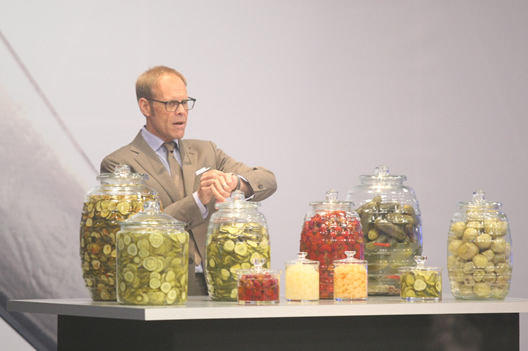 For the secret ingredient challenge, Alton Brown instructs contestants to make a snack out of pickles and pickled items like pickled peppers. The point is raised: aren't pickles snacks themselves?

There's probably nothing more annoying than being in the weeds except being told, "You're in the weeds," by Alton Brown.

Duskie Estes owns only one shirt. Or perhaps multiples of one shirt. Support Local Food, says the shirt(s). Though I agree with the sentiment, as Estes' unlikeable nature increasingly grates, I fear that out of some sort of aversion therapy, by the end of the show I'll shun Greenmarkets and head straight to C-Town.

Marc Forgione, like Samson, is given strength by his mohawk. His fortunes grow as his mohawk does. Forgione wins the challenge with a duck liver mousse on top of a pickled garlic toast and, "what they call in England, 'piccalilli'." Like Piccalilli Circus! 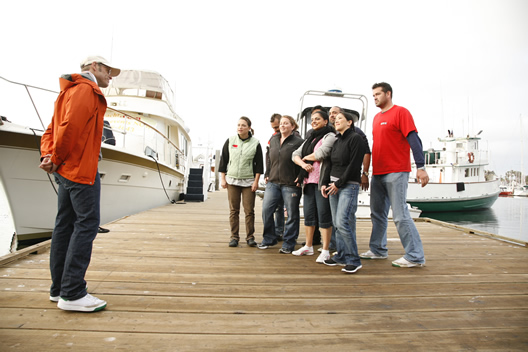 The Chef's Go Fishin'. Apparently Scorpion Fish is abundant in California waters for nearly every chef catches one or more. Marco Canora — city boy — has beautiful eyes but can't fish for shit. He gets three little guys. Ming Tsai though, dark horse, scores something like 7. Chef Tio gets a snapper. Chef Caswell gets a sand dab. Chef Mary Dumont gets a shark and lets it go. That is a bad omen, obviously.

A word about the challenge word. Last week the word was, I believe, innovation. This week it is resourcefulness. Or, if you're the kind of person that says "libary" for library and "muzam" for museum, rezourcefulness. For obvious reasons this is a vexed metric. I would define resourcefulness as the formula below, wherein R is resourcefulness, C is creativity and M is materiel needed to complete adequately ones chosen:

What this meant in last night's challenge is chefs with a plenitude of resources — chefs like Caswell who are good or lucky fishermen and is there really a difference? — were actually at a disadvantage because their M value (divisor) was substantially higher leading to a lower quotient. Chefs like Canora, on the other hand, who caught only three puny fish were predisposed to acquiring a higher R value. Either that or chefs performed delightful arabesques of sophistry as they attempted to cast hardship where hardship wasn't and redefine resourcefulness as the acquisition of resources [viz. Dumont's "I caught the biggest fish, I think that was resourceful."] instead of the creative exploitation of resources.

For in fact, apologies to Chef Dumont, but that's catching a large fish on a large boat with lots of bait in stocked waters isn't resourcefulness. If, however, you were provided with only with a wooden raft and set to sea and once adrift you fashioned from a plank a pole and from your pantaloons a primitive rope and from your dental fillings you hammered out a hook and you caught a fish that way, then yes. Very resourceful. 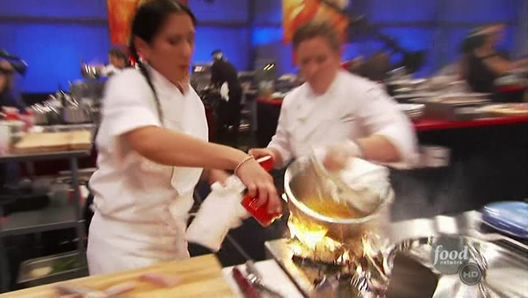 In the end, it was in fact Dumont who went home. Her pineapple scorpion fish tartare was savaged. The cruel irony here, of course, is that when Chef Tio idiotically set her plastic mixing bowl aflame, it was Chef Dumont who knew exactly what to do. She snatched the bowl, dashed it to the floor and beat out the flame. All that was offered by Marco Canora — the ultimate winner of the challenge no doubt thanks to not only his creative old/new school versions of cacciuco but his poor fisherman performance — was, "Put that down, you'll burn yourself." In the end, sadly, it was Dumont who felt the most the burn.