Matt Lewis and Renato Poliafito started Baked bakery in Brooklyn in 2005 with the goal to celebrate "American desserts beyond the cupcake." Now, five years later, they have added a location in Charleston, South Carolina and are on their second cookbook, Baked Explorations (buy on Amazon

), which updates traditional American sweets. We talked to them about French interpretations of American desserts, the Southern palate, and Dr. Pepper Jello Salad.

Let's talk a little bit about how this cookbook is different than the first.

Matt: The first book which was Baked: New Frontiers in Baking was really one hundred percent reflective of the bakery, and the second book is more reflective of Americana desserts. So we tried to take things that maybe had their heyday, like a grasshopper pie, and bring it back and reinvent it. 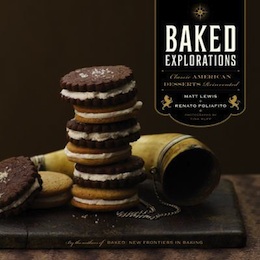 Matt: There's a lot of desserts that go through fashionable periods, the grasshopper pie was a good example of one. We also pulled out anything that was regional, so black and white cookies, whoopie pies, stuff like that. America always seems so homogeneous to people, but there are pockets of regionalism.

We also have a lot of, well, not a lot, but a few recipes in the second book are recipes from Baked that we may have developed since the first book, or that have come to the forefront. We made sure to include those, because we did get a lot of people who were like, "Why isn't this cookie in the book?" or "Why isn't this cake in the book?" or "This is the best cake!" So we tried to appease those people as well. And I think the first book would never had a recipe for jello salad.

Matt: I had never heard of it before!

Renato: I had heard of it but was always confusing it with ambrosia salad.

Oh, see, I'm from Wisconsin and both of those are big. Big Midwestern desserts.

Matt: Ha, everyone kind of claims it for their own. So like if you're from Pennsylvania, they're like "No, this is a Pennsylvanian dessert." But the first book would never have that in it. The second book, we were absolutely inclined to put it in.

Matt: We weren't as restricted in what we were doing.

Renato: We weren't as restricted, and people knew who we were. With the first book you want to put your best foot forward. Have a very clear picture of who you are, so people understand what your approach is. The second book, we already had a fan base. We could have a little bit more fun.

Matt: We could build on it.

Matt: It's funny. There are a bunch of bakeries in New York, or in any really large city, that represent traditional French baking, or traditional French pastry. To some degree, Italian baking and pastry. Unfortunately, a lot of American bakeries are represented by the cupcake. Absolutely no hate towards the cupcake, we just feel like maybe the chocolate chip cookies weren't represented, or brownies were under represented. They're really difficult to make, there are just so many bad versions out there. So our bakery is, I guess, a mantle for these desserts.

Renato: We just wanted to make sure that every classic American dessert got to see the light of day. You know, like a cupcake place is just known for their cupcakes. And sometimes not even.

Matt: Brownies are one hundred percent an American desserts. If you've ever been to France, they have the brownies with icing this tall. And they're cakey. So ours was about just approaching everything that was quintessentially American.

You also talk about how the recipes are historic, "heritage recipes." Looking at these old recipes, how have you seen desserts change, and how do your backgrounds influence your perception of the evolution of American baking?

Renato: You know, I think it actually goes back to the cupcake. We've seen American desserts change in the sense that so much emphasis was put on the cupcake. So many American bakeries open up just selling one thing.

Matt: I think a lot of heritage recipes were developed with margarine, to some degree.

Matt: Tons of sugar. They were made when really good quality ingredients weren't available. So the chocolate they were using back in the fifties and sixties wasn't Valrhona, it wasn't Callebaut. Nobody really had access to it. They were probably using baker's chocolate. So we redeveloped all the recipes with quality ingredients, butter. Maybe a little less sugar. There's slight Italian influences. Renato's parents are from Sicily, my grandparents are from Italy. It was all about redeveloping the recipes with a more sophisticated palate.

In your book trailer, you mention that you ask people who come to your book signings to submit recipes. What sort of crazy recipes did you get from that? What were you impressed and surprised by?

Matt: When we did this the first time, to develop the book, we got a lot of really great recipes. But everyone has their own Devil's Food Cake recipe. I noticed that even though they're all heritage recipes per se, they're all kind of riffs on a classic. Probably the most unusual and the most difficult to parse was the Mississippi Mud Cake, because everyone has a very, very different, wildly different interpretation of what it should be. So we have two versions of it in the book. Some people think you have to use ice cream for it, and the other one is more like a fudgey pie.

Looking through your cookbook, all of the recipes are somewhat hefty. I'm not sure how else to put it; it's peanut butter, it's malt, it's chocolate. Why do those types of desserts appeal to you, as opposed to fruit. What draws you to those flavors?

Renato: We definitely try to balance it out with a couple fruit recipes. The pear tart. And parfaits and things like that. We know not everyone loves peanut butter, malt, banana, chocolate.

Matt: But they're definitely our favorite flavors.

Renato: Yeah. And they're the ones we feel super comfortable with, because we know they'll always sell. Like when we opened up Baked, this is the story we've told a thousand times, we tried, with the cute little tarts, and tried to be a little more fanciful with our desserts, more fruit based. People would just come and be like, "I want the largest piece of chocolate cake. I want the biggest peanut butter crispy bar." Just: bars, deep, rich chocolate brownies, cakes. We just catered to our customers.

Matt: It just kind of worked out, as a true reflection of who we are. I know I could consist on just peanut butter and chocolate. On just daily basis.

Renato: And you know, the little tarts and things, they're just a little more fussy than we normally are anyway. But it was just really convenient. We were just like, okay. We like chocolate cake. Everyone else likes chocolate cake. We'll just make a lot of chocolate cake.

Matt: We did have our lemon cake.

Renato: We have a lemon drop cake that I love. We've had that since day one. We would phase it in and out, but lately it's become so popular that we just decided to keep it all year. I always go for chocolate, but when this cake is around?

Let's talk about the design of the book, the use of antiques. Did that come from you guys?

Renato: Yeah, we worked with the same team of people as we did with the first book, and for the second one we had creative meetings before we even started anything. We just explained to the prop stylist, and the photographer, the actual book designer, "Look, we're going a slightly more mature, a slightly more-

Renato: There's a lot of it in New York right now. It seems to be this trend of a more gentlemanly aesthetic.

Matt: We were not big fans of Grandma's kitchen.

Renato: But we didn't want to redo the first book, which seemed a little retro, a little light. We wanted to go in that same vein. Still the same team, so you'll see a lot of the first book echoed in the second book in certain aspects, but we wanted to just have a fresher perspective.

Matt: Still kind of cool and masculine; fun, but curious.

Renato: What is that? Is that a chipmunk taxidermied behind the cake? I guess it is.

So, opening the Charleston location, has that had an influence on your cooking? What's different between the two locations?

Matt: It is different. The thing about opening a second location, especially so far away, is that you find out how different the palate is. Because even though everything is so homogeneous, there is that regionality. It is more fruit-based. Huge coconut fans. It is the funniest thing, it's such a stereotype, but Charleston is all about coconut. And a slightly sweeter palate. For instance, up north we do our red velvet cake, which is commonly dressed with a cream cheese frosting. Our is done up north with a cinnamon butter cream. Down south, they'll try to offer the cinnamon buttercream but they'll also offer the cream cheese frosting.

Renato: Sometimes in New York we'll get: "Can you please put cream cheese frosting on it?" And we're more than happy to.

Matt: But it's definitely a sweeter palate down south.

Renato: So whereas we'll cut the sugar in a lot of our recipes, especially a lot of the recipes we've acquired over the years, we'll knock it up a notch or two for the Charleston store.