Share All sharing options for: Craft Beer Goes Global: It's Big in Japan 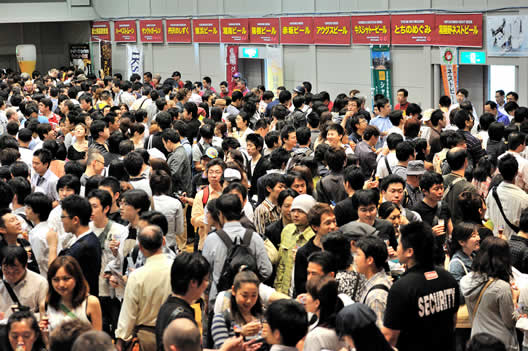 Walking into a Glasgow pub last summer, I was happily surprised to see Brooklyn Lager on the UK-heavy list — that's plenty wild — but would you expect to find West Coast-style IPAs as far afield as Tokyo? As the good beer revolution marches on here in the United States (1,600 breweries and counting), one interesting aspect is how the rest of the world is embracing new-era craft beer, even in countries where beer would seem an afterthought, such as saké-soaked Japan. Like snowboarding or the Levi's of yore, American-style craft beer is quickly becoming a hot cultural export, with enterprising brewers hawking West Coast-style IPAs made with heirloom American hops to a thirsty new clientele in the Land of the Rising Sun.

The Pacific island nation is on track to become the next hot beer pilgrimage destination, with an estimated 225 craft breweries and its own national craft beer festival. There's the northern island of Hokkaido, with the famed Sapporo Brewery, which, though not really "craft" and widely exported, is worth visiting for its beer museum and sprawling, gorgeous beer garden.

There are at least eight or ten other microbreweries on Hokkaido alone including Taisetsu, well regarded in Japan, while adventurous U.S. drinkers may be familiar with Hitachino (Kiuchi Brewery in Ibaraki, main island).

Among other excellent izakaya-friendly brews, the firm makes a sake-barrel aged Hitachino Nest beer called XH which is scarcely available outside of Japan, but well worth seeking out (and which was named by my thirsty colleagues and I over at Men's Journal as one of the top 25 beers on earth for 2010). Yo-Ho Brewing Co. of Karuizawa is gaining notice for its takes on U.S. and British beer styles, including an American-style golden pale ale called Yona Yona Ale. Narihiro Suzuki of Ise Kadoya Microbrewery (Ise City, Japan) is making all-American style craft beers with imported American malts and hops, the only brewer in Japan to be going to such lengths.

American expat Bryan Baird of Baird Brewing Company (Nakameguro, Japan) is perhaps the best example of American craft beer forging ahead into terra incognita. Baird recently hauled three gold medals home at the World Beer Cup, held in Chicago last May, for his Numazu Lager, an American amber style lager; his Saison Sayuri (Belgian- and French-style saison), and Country Girl Kabocha Ale, a specialty beer made with squash. Heck, there's an even an app for craft beer in Japan. What will they think of next?