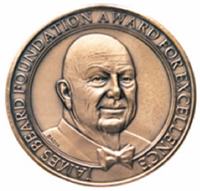 The James Beard Foundation announced sweeping changes in their journalism categories today, saying that "judging will be based solely on content and not on the outlet." Said Dorothy Kalins, Chair of the James Beard Foundation Journalism Awards Committee in the press release, "The journalism awards will be platform neutral giving more opportunities to reward excellent work." A new award "Publication of the Year" is designed to recognize "excellence in one magazine, newspaper, or website."

They killed off the categories "Website Focusing on Food, Beverage, Restaurants, or Nutrition" and "Food Blog" — replaced by "Individual Food Blog," described as "the product of one primary voice, or a small group of regular contributors."

In addition, there are new topical categories including "Food Culture and Travel," "Profile," Humor," and "Personal Essay."

Downloadable entry forms and links for voting for the 2011 James Beard Foundation Awards will be available noon EDT on October 15 at www.jamesbeard.org/awards.


NEW YORK, NY (October 14, 2010): The James Beard Foundation Awards Committee announces today an open call-for-entries for the 2011 James Beard Foundation Awards, the culinary industry’s most prestigious honors. Nominations for the Restaurant and Chef Awards can be completed and submitted online at www.jamesbeard.org/awards as of noon EDT on October 15. Downloadable entry forms for the Book Awards, Journalism Awards, Broadcast Media Awards, and Design and Graphics Awards programs are also available.


In addition, for the first time in the history of the Journalism Awards, judging will be based solely on content and not on the outlet. Name and format changes have also been made to the individual categories. A special Publication of the Year Award has been added to recognize excellence in one of the following platforms: magazine, newspaper, or website.


“This radical evolution of the category represents a huge leap forward for food journalism,” said Dorothy Kalins, Chair of the James Beard Foundation Journalism Awards Committee. “No longer will it matter where an incredible piece of service journalism, a politically-charged essay or in-depth profile appears. The journalism awards will be platform neutral giving more opportunities to reward excellent work.”

The new categories and definitions for the 2011 James Beard Journalism Awards are:

Craig Claiborne Distinguished Restaurant Review Award: Recognizes discerning criticism of enduring value which contributes to the larger discourse on cuisine or restaurants. An entry consists of three restaurant reviews or critiques published in any medium, attached as one entry.

Food Section of a General Interest Publication: Recognizes excellence in food writing, reporting, and packaging of a regularly-published food section in a non food-focused publication. Entries may be from any medium and consist of three complete examples of the full section.

Food-related Feature: Recognizes excellence in a single food- or drink- related article published in any medium that demonstrates enterprise, curiosity, and rigor.

Personal Essay: Recognizes excellence in a first-person essay on any food or drink-related topic, published in any medium. An entry consists of one eloquent essay that demonstrates a unique voice, perceptiveness and style.

Humor: Recognizes a single piece of written and/or visual food- or drink-related satire, parody, or other form of humor, published in any medium.

Profile: Recognizes a dramatic presentation that brings to life the world of a chef, restaurateur, grower, producer, or other figure or group of significance to food or drink, published in any medium.

Food Culture and Travel: Recognizes the importance of place, culture, and history in food journalism. An entry consists of a single piece, or series of related pieces or posts, published in any medium, that makes the connection of food to a community or location.

Environment, Food Politics, and Policy: Recognizes excellence in investigative reporting, analysis, or other public service journalism on environmental, political, or policy-related issues regarding food or drink, published in any medium. An entry consists of a single piece or a series of related pieces or posts.

Health and Nutrition: Recognizes enlightening journalism on food- or drink-related health or nutrition topics published in any medium. An entry consists of one definitive article or series of thematically-related pieces or posts.

Food-related Columns and Commentary: Recognizes the work of an individual that demonstrates thought-provoking opinion and a compelling style. An entry consists of three examples, regularly published in any medium.

Wine and Spirits: Recognizes distinctive style and innovative approach. An entry consists of a single article on wine, spirits, or other alcohol beverages, published in any medium.

Multimedia Food Feature: Recognizes excellence and innovation in storytelling or communication. Entries consist of an integrated package of one piece, or a series of up to three pieces, on food-or-drink-related topic which integrates multiple tools (such as video, audio, narrative, links, social media), published in any medium which allows for these tools.

Individual Food Blog: Recognizes individual enterprise and excellence in a single food-or drink-related blog that is the product of one primary voice, or a small group of regular contributors. An entry consists of three days, weeks, or threads of posts, whichever best represents the publishing schedule of the work.

Publication of the Year: Recognizes excellence in one magazine, newspaper, or website. It is awarded by the Journalism Committee of the James Beard Foundation and is based on nominations presented to them by the full roster of Journalism judges and by former James Beard Journalism Award winners.


Restaurant and Chef Awards: Online voting ends at midnight on December 31, 2010 (various categories for restaurants, restaurateurs, chefs and wine and spirits professionals in the United States)

Book Awards: December 15, 2010 (for food and beverage books published in English, in the calendar year 2010)

Restaurant Design and Graphics: January 28, 2011 (open to architects/designers in North America for restaurant projects completed since 2008)

Downloadable entry forms and links for voting for the 2011 James Beard Foundation Awards will be available noon EDT on October 15 at www.jamesbeard.org/awards.