Share All sharing options for: The Morning Benders Uncover Culinary Gems in Strip Malls All Across America 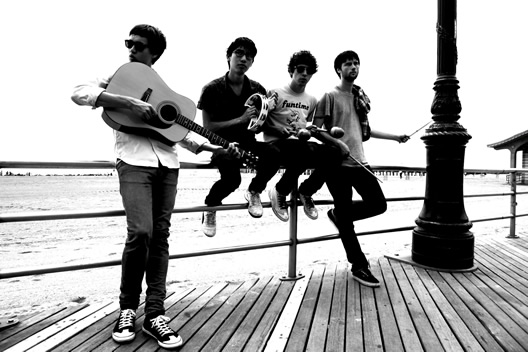 Don't be fooled by The Morning Benders' lanky frames — these Berkeley natives boast a big sound and big appetites. Their orchestral pop and 'Wall of Sound' intensity made their debut album iTunes' Indie/Alternative Album of the Year in 2008. Flash forward to 2010, and the Cali boys have moved to New York City, toured the world with major acts including MGMT, Grizzly Bear, and Yo La Tengo, and released their latest album on the UK's seminal Rough Trade Records. I caught up with frontman Chris Chu to discuss everything from Asian strip malls to tapas nirvana.

Who would you say is the biggest foodie in the band?
Hm...probably me. But my brother (Jon, guitar/keyboard) is my partner in crime though because we both grew up with a lot of good food. Our dad is an amazing chef so we have a lot of love for it. We're always searching for new places and trying new stuff.

Do you guys have a preferred method for searching out new places on tour?
Yeah, I usually go to Chowhound, I spend way too much time on that site searching through the forums. And we have a few friends we'll contact when we're on tour who are big foodies. They're kind of spread out across the world, but they're a great resource as well. Plus, when you're searching on the internet, a lot of places with really bad reviews turn out to be amazing so they're some hidden gems like that, too.

What sort of "hidden gems" have you uncovered on tour before?
We came across a pretty great Korean place in Nashville, Tennessee that got some bad reviews... I think because it just looks pretty shitty. It was in this ghetto part of town in a strip mall, well not even a strip mall, like half a strip mall, but it turned out to be really good! We've also come across some great Vietnamese places that are in strip malls too, we came across a great one in Phoenix, Arizona whose name I can't remember. And there's also a place in Westminster, California with a huge Vietnamese population and a part of town called Little Saigon with all-Vietnamese restaurants and markets. There's a place there that a friend turned us on to called Hanoi Cafe that is North Vietnamese cuisine, which is kind of hard to find.

So what can you find there that is isn't usually on menus at most Vietnamese restaurants?
They have these pork meatballs that they serve in a broth and you eat it with vermicelli noodles and fresh herbs and it's incredible!

It seems like you guys are pretty open when it comes to trying new foods on tour — do you guys have any specific dining requirements?
Well, I'm pretty careful about what we eat. And a lot of times on the road the healthiest option is usually vegetarian so while we're not vegetarians normally, we do eat vegetarian quite often on tour. Also just a lot of cuisine that we really like just happens to be vegetarian so we'll go for that a lot. For example, one of our favorite things to eat is south Indian food, which is generally vegetarian by nature... in fact, I had it for lunch today.

Other than uncovering a few diamonds in the rough, what would you say your best dining experience has been on tour so far?
Well we just got back from touring in Europe and there's always a lot of different stuff to try out there. I'd say one of the best was this tapas place in Barcelona we researched on Chowhound and it was by far the best tapas I've ever had. Seriously, it's night and day getting it there versus in the States. It was called Cerveceria Catalana.

Fast food seems like a necessary evil on tour, do you guys ever break and hit up any chains?
I don't really eat fast food. What we do is go to Whole Foods and get hot bar boxes to go. We'll go to markets like that and plan ahead, get stuff that won't spoil and then save it for lunch. In Europe a lot of the markets in truck stops are actually really good. Basically, we're really passionate about food so for us in the States it's all about Whole Foods since so much of the food here on tour is just soooo bad.

As dudes who are passionate about food, do you regularly splurge on "fine dining"?
Yeah I mean the only thing I do splurge on is food. I don't really buy anything or spend money ever which makes me feel justified in paying whatever it takes to get good food. We were in Paris recently and I went to some really nice bistros with 10-course tasting menus and stuff, we're really into that.

What are your favorite upscale spots Stateside?
We grew up in Berkeley, California so Chez Panisse is really the spot. That place is pretty revolutionary I guess because it was one of the first places to use all organic and local stuff. The person who started it, Alice Waters, is kind of a figurehead for that movement.

And when you want to go cheap, do you ever go with street food?
Yeah, I love street food. One of my favorite spots for it is Portland, Oregon. They have an insane food cart culture there, everything's so cheap that it's competitive in that you can get a really good meal for just $5. They're surprisingly good and it's great to have all those choices, all types of cuisine. One of the first ones that started there is this cart called Potato Champion, which is pretty much late-night food: french fries but with all these toppings. They have Thai fries, peanut butter and jelly fries and things like that. Then there are really great Vietnamese and Indian food carts there too.