Throughout the New York City Food & Wine Festival this past weekend, Eater welcomed bloggers, journalists, and food world stars to our lounge at the Standard Hotel. So many people came that we couldn't fit all the interviews into our weekend coverage. So here, now, Gail Simmons who was nursing a cold. Total trouper. 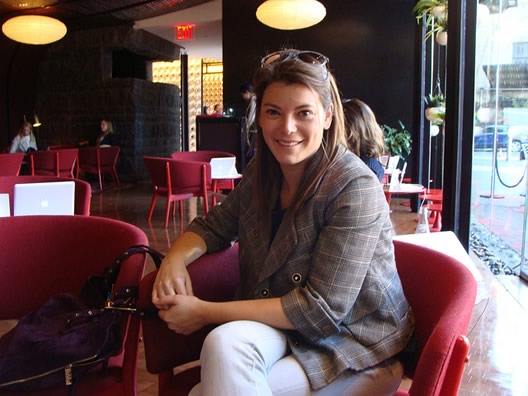 All those meltdowns on Top Chef: Just Desserts. Will there be more, or is that it?
I can't really say, but I assure you it stays interesting. I do think it's the most interesting cast of characters we've ever had on Top Chef. I've never seen anything like it in my life. Pastry chefs have a unique personality type — I know that they're exacting and I know that they're anal-retentive — but in the best way. And I don't want to make any generalizations, that pastry chefs are all-drama all the time, but this group was incredibly casted. While they can be dramatic and sensitive and confrontational, they're all super-talented.

Not having recipes must drive them crazy.
It almost didn't make sense. On the first day of shooting, the guest judge, chef Jacques Torres, found out they couldn't have recipes and he was livid! He couldn't believe it. It's not like a regular savory chef, if you know the theory of how to braise, you can braise everything. But in pastry it's not like that — it's exacting down to the microgram. It kind of made us second-guess ourselves, but time after time, in every Quickfire and elimination, the dishes just landed on our plates, perfectly done.

So how do they get by without recipes?
Even though pastry chefs rely on recipes really heavily, it comes from understanding and feeling. Also, they rely on teamwork a lot more and share ideas and recipes — I think that's what differentiates our show from a lot of the other food shows. We did a bake sale a few weeks ago, and one of the best recipes was a brownie recipe that Eric gave to Malika.

How is it moving from the judge role to the host role?
It was challenging — I've been a judge since the first season, and in comparison, judging is the cushiest gig, While I'm proud of it, I wanted to do something else. I had the advantage of watching the person do it for like seven, eight seasons. Tom and I have been basically living with each other, in the good and the bad, Padma [Lakshmi] was actually great about telling me some of the thing that Bravo wouldn't tell me.

I get a lot of breaks being a judge. I leave for a day, I come back for a day, and then I can leave, and I have the semblance of normalcy while we're shooting. As a host you really don't, you're there every single day. Just being a host in general, you have to deal with lines, you have to move the story forward, and I'm not an actress and that took a little getting used to. There's only one way to say things, it's not like you can just make it up, because they depend on the legal details of the challenge. It was tough to know how I would come across, and it takes a little while to find your footing for sure, but so far it's been great.

What about eating?
It actually was pretty great. It got a little bit intense on day three. I was starting to wobble a little bit. I mean, 12-14 desserts a day, for 25 days, was a daunting proposition. But I would wake up every morning and be excited that it was cupcake day or bake sale day. At first we feared that with desserts we would run out of ideas — another chocolate cake, another cookie — but it never felt that way, especially for the pastry challenges.

In Top Chef finales, they usually have the contestants do a great, multi-course meal. How is the finale of Desserts going to work?
We actually did it a different way, we did it different from how they do it on Top Chef. We tested them in different ways.

I think all of us were a little naive going into the show. Because we had been doing Top Chef and Top Chef Masters, we started shooting October 2004, exactly five years ago this month. We've done eight seasons of Top Chef, Top Chef Masters, and now Desserts.

We all thought that it would be Top Chef but with sugar. The cook time, the bake time, it's all much longer. It can't be a half-hour Quickfire. Then it has to go over 45 minutes before you can dress it or let it cool or finish it. We even rebuilt the Top Chef kitchen. We took out a lot of stove tops and added a lot of ovens, and put in things like marble counters and special kinds of lights for shaping sugar. We got into the kitchen one day, and one of the chefs yelled out, "There's no pectin in this pantry!" The little things. We had a very talented pastry chef in terms of building out the kitchen.

What about All-Stars?
It's awesome. It's going to be fun. It feels really different because these people are now known very, very well. There are fan favorites, there are people that made it all the way to the finals, and they all have some sort of redemption on their minds. With the exception of Masters, normally we're always seeing strangers at the table. We don't know who they are, but it's so different now with All-Stars. It's more charged. But since they've shot their seasons, we've developed relationships with these people — people like Spike or Dale Talde — that I see on a regular basis. But you know what, we all came to the table being very respectful, and we weren't giving them any free passes. It was just an interesting dynamic for us. I do feel a little bit sad to see contestants get eliminated, but being a nice person has nothing to do with the equation, and that's the role of the guest judge, to keep us on the straight and narrow. They were much more prepared this time around.

Because you're Canadian, are you involved at all with Top Chef Canada?
No, I'm not involved, because it wasn't the same thing. They asked me to be a part of it, and literally it was just a date conflict. I did talk to them, I know they're really happy about it. The production company came down to get the feel of how we do things.

[Food & Wine editor-in-chief] Dana Cowin was telling us how the magazine is going to feature a trend every month. What do you think are trends right now?
It sound silly to say that vegetables are a trend, but in our November issue we're talking about it a lot. It was always so much pork and chicken and bacon, but now I think the tides have turned — we're taking better care of ourselves — and we'd like to think that the year of the vegetables is upon us. Like Noma-style, cooking them in dirt and then braising them in butter for a few hours. But flipping it around, making vegetables as the main, and meats as the side. Even Mario Batali at Eataly, he's got a vegetable curator and a vegetable butcher.

What are you eating now in New York?
I think it's a really good time in New York. It feels a lot happier and stronger this year. I'm eating at Torisi, I'm eating at Roberta's, I just went to the new new Bar Stuzzichini downtown. I'm excited about Andrew Carmellini's The Dutch, I used to work for him and with him for many years, I worked for Daniel Boulud when he was at Café Boulud, and Andrew was always a mentor of mine, and I'm psyched about him. He's actually in the Food & Wine Cookbook. I'm excited about Osteria Morini, I'm excited about Hill Country Chicken, the The John Dory 2.0 at the Ace Hotel, I'm excited about a lot of good little things.