Share All sharing options for: Next Iron Chef, Episode 2: Diners, Drive-Ins, and Re-Do's 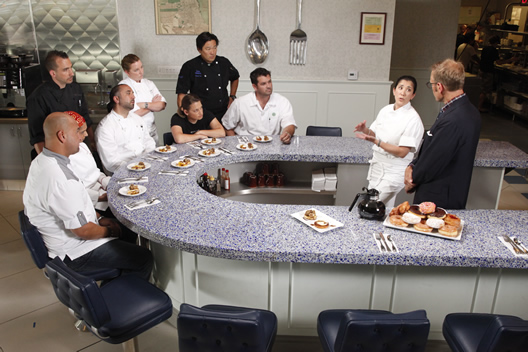 Perhaps because I had chef fatigue — having spent the lion's share of the weekend staring at the meaty faces of chefs as they milled, mingled and pressed flesh at the New York City Wine and Food Festival — but I watched last night's Next Iron Chef with my eyes closed. I wasn't sleeping but rather turning my drishti inward. Surprisingly, or perhaps not, there was little net change in my enjoyment of the program. As Eric Ripert says, "All is emptiness." And, I think, as in those lights-out restaurants like Dans Le Noir, one sometimes sense more with one sense shut off. And, you know, I peeked a bit.

Last night's episode was dedicated to improving and innovating — someone needs to innovate how many times they use that word because it's quickly becoming annoying — classic American diner staples, moving from donuts and coffee in the non-elimination challenge to the canon of diner food in the main challenge. I imagined piles of glazed donuts, their trans fats glistening under the studio lights, and pots of diner coffee, its murky depths unpenetrated. Confirmed.

The consensus quickly developed among chefs to do two components: sweet and savory. If you close your eyes, Bryan Caswell sounds almost exactly like Coach Eric Taylor from Friday Night Lights. Eyes open, confirmed. Clear Eyes! Full Hearts! Can't Lose! Caswell explained in his gravelly voice he was making a Vietnamese donut-coffee milkshake which did seem innovative to me and delicious.

Chef Mary Dumont contributed to the broadcast a string of bleeped-out invective in a Masshole brogue after slicing open her hand. The cut would not stop bleeding and, as she drizzled gravy over her banana fritters, one couldn't help but wonder how much of her Type O negative made it in there. "My dish is called Bananas and Blood. What I did was I deep-fried banana fritters and finished them with a reduction of coffee grounds and my blood." Needless to say, she lost.

The best line of the show, the season and perhaps ever belonged to Marco Canora who, responding to criticism of his coffee-encrusted Canadian bacon, neatly embodies my life philosophy: "Bitter is a great flavor that isn't used often enough." 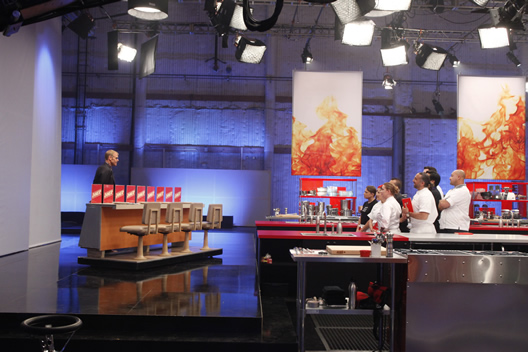 Having emerged victorious, Chef Maneet Chauhan — who has the most mellifluous accent of the crew — got to chose what classic American diner dishes her fellow chefs would re-invent. She tried to screw Marco Canora over with Livers and Onions and cockblock Marc Forgione with Chicken Pot Pie. She herself chose Burgers and Fries, a cop-out if I ever saw one. Duskie Estes, whose voice interestingly is as grating and as annoying as her face, was given fried chicken and managed to muff it by using quail. And poor Mary Dumont gets pot roast. Chef Pagan got meatloaf while Ming Tsai received marching orders for corn beef hash. Others got others obvi.

And so the chefs inverted, invented, inveigled and, inveighed to be innovative, ignored their dishes. Forgione — who with eyes closed sounds like a young Al Pacino — turned his Chicken Pot Pie inside out to make Pie Pot Chicken. Canora — who with eyes closed sounds like a young Marlon Brando — inverted his Livers and Onions to become a duo of Liver and Onions and Onions and Liver. He was very excited and thought he could be a contender. Maneet Chaudran made a veggie burger like a fool. Mary Dumont couldn't open her pressure cooker, neither could Canora open hers. Only Caswell — eyes clear, heart full — could succeed. Mario Pagan added mango to meatloaf and called it tropical.

Now at Judge's Table, let none of us skirt the obvious: Donatella Arpaia is the worst. Yeah, the woman can make meatballs but proper adjudication is well beyond her attention-seeking sophistry prone ken. She yammers on to hear herself yammer. [For those of you who would like to marvel at how some bad ideas are realities, please check out Yammer, which is Twitter for companies.] She's like the Toby Young of Next Iron Chef but amazingly less clever.

In the end there were two clear losers. Chef Ming Tsai's dish from start-to-finish was pure and utter shitshow, a ballotine of show and shit wrapped in showy shit, a random word association game he played with himself and the pantry to cloak Corned Beef Hash in a thousand different ingredients and sauces. Chef Mario Pagan's meatloaf was just a mess and, in addition, uninventive. So two disasters — one from a surfeit of ambition and one from a lack of invention — race to the bottom. Ultimately, Pagan goes home spouting the sort of ex post facto wisdom losers often do. "The chefs better get with the program," he says shortly before he vanishes, unaware of the irony that they are all while he, literally, is not.