Fresh Hop Ales: A Seasonal and Ephemeral Genre of Brew

Share All sharing options for: Fresh Hop Ales: A Seasonal and Ephemeral Genre of Brew 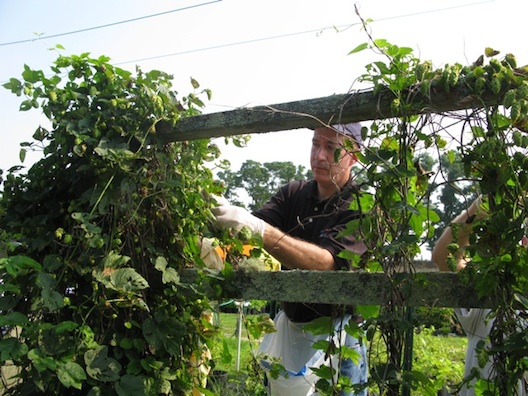 Fresh hop ales, the Beaujolais Nouveau of beers: no other beer is so seasonal, so ephemeral, so immediately distinctive and delicious. Every fall in the Pacific Northwest, the American cradle of hops production (the U.S. is second only to Germany in volume), the ripened hops' tall leafy trellises begin to sag with the weight of millions of flowers, and soon they're harvested, dried, and packaged in pellet or bale form for later use. On certain backroads, the air in Washington's Yakima and Columbia Valleys and Oregon's Willamette (say 'Will-am-ett' dammit) is redolent with the grapefruity smell of the delicate pine cone-like flowers, which are added to beer for their bitterness, aroma, and natural preservative powers.

But not all hops make it to the temperature-controlled storehouses where they're carefully monitored to avoid spontaneous combustion. Some are hauled off the lines and added directly into unfermented beers in nearby breweries, creating a fresh, and fleeting, genre of brew, more or less interchangeably referred to as fresh-hopped or wet-hopped. British brewers in Kent and Hampshire have long called them harvest ales, and the term is apt. It's a once-a-year occurrence, and it's worth celebrating.

Hops must be dried or brewed within 24 hours of being picked, or they begin to rot (and, at anywhere from $3 to $20 per pound, this is not an option). Working with growers, brewers time their arrival to a farm to coincide with a batch of beer back in their brew house nearing the boil stage. Then they race back and plunge the flower cones directly into what's called the whirlpool stage, which follows an hour-long boil.

"To get a comparable extract out of the hop (compared to the dried version), you have to use about five times the amount of hops, and when you add that much more, you get more of a green, chlorophyll, leaf and vegetative matter flavor," says Portland, Oregon-based Full Sail Brewmaster John Harris, who has three fresh hop beers hitting taps this week in select Northwest taprooms. One, a pilsner called Hopfenfrisch, is accented with a cousin of the delicate German Hallertau variety, Rainier hops, a variety that was developed by botanists at Oregon State University. "It reminds me of the agricultural nature of beer," says Harris. "We're using a crop that's right out of the field."

Available Only For a Limited Time

The only drawback to fresh hop ales? Now you see them, now you don't. On tap now and perhaps for the next two or three weeks, they're made in extremely limited quantities, don't age or travel well, and because they're often so tasty, tend to drain from kegs faster than Keystone Light at a tailgater. Better beer bars and bottle shops will score a few kegs and bottles, and there are a handful of breweries around the country beyond the Northwest making fresh hop beers, such as in Colorado and on Long Island, both of which now boast fledgling hop growing industries.

The beer-blessed state of Oregon produced 57 different commercial fresh hop ales last season, according to Brian Butenschoen, Executive Director of the Oregon Brewers Guild. The beer aficionado website Beer Advocate lists 417 fresh hop beers made in 2009. None are worth seeking out much past October or November, since they tend to be lighter ales (without the shelf-life of higher alcohol beer styles such as IPA) that oxidize fairly easily, and the desired hop character—a spicy, floral bombshell in the best of them—fades quickly, too.

In other words, they're worth seeking out right now. "Fresh hop beers are gems in liquid form, bringing you one step closer to standing in the middle of a hop field," says Julia Herz, of the Brewers Association, the trade group representing America's 1,600 (and counting) small and independent craft breweries. "Remember the Peppermint Patty campaign that had the taster suddenly transported to forests and mountaintops? Fresh hopped beers show off the truest essence of the hop's essential oils. Think citrus, evergreen, mint, herbs, and earthy aromas delivered to your nose in that first sniff before you even get to taste the beer."

Some of the best breweries making fresh hop ales include Oregon's Laurelwood, Deschutes, Rogue, Full Sail, Washington's Walking Man, and California's Sierra Nevada (which, like Oregon's Rogue, grows its own hops). To find a fresh hop beer or festival near you, visit your best local beer bar and check out the events links at beeradvocate.com, which currently lists 56 fresh hop festivals coming up around the country.