The Rise and Eventual Fall of the Jersey Shore Cast

Share All sharing options for: The Rise and Eventual Fall of the Jersey Shore Cast

Since the Jersey Shore premiered in December, it seems that nary a day goes by without some tabloid story about the cast of MTV's reality juggernaut. Lucky for us, most of them have something to do with restaurants and nightlife. Below is a scientific chart tracking the Jersey Shore's meteoric rise into society. But what goes up eventually comes down. Reality TV stars have a way of accelerating that timeline. 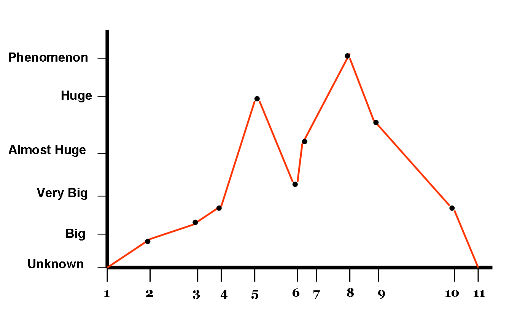 1. Before the show premieres, these lovable Guidos and Guidettes were unknown.
2. Jersey Shore premieres on MTV in early December, the cast become instant celebrities.
3. Hoping to capitalize on the show's success, Tortilla Flats introduces the Snooki Punch Taco, in honor of the "most fascinating guidette of 2009.".
4. Several castmates are spotted throwing down at NYC's Marquee, which is joyously celebrated by club owner Jason Strauss on Twitter. Things are getting big. In fact, things are getting very big.