ON THE SCREEN—Ruth Reichl just might be coming to a theater near you, maybe. Her memoir "Garlic and Sapphires" was sold to Fox years ago and according to a rep from Fox, the film is in "active development." So which actress should play Ruthie? [DD via Eater LA]

CHAINDOM— A great review of the new Domino's Pizza over on the Awl that includes the following wisdom: "Also, I would do this again. Even though their pasta in the bread bowl things make me want to barf." [The Awl]

CHICAGO—A man is suing Morton's Steakhouse because he claims he was forced to ingest smoke during his meal due to a fire in the kitchen. And the restaurant made him pay for his meal too. The nerve. [ChicagoNow]

THE TWITTERVERSE—PR people, listen up: everyone is trying to use Twitter and other social media in fun new ways, which is fine and oftentimes quite handy. But with a tip of the cap to Ms. Pim, the below madness can be just be labeled "Spam." 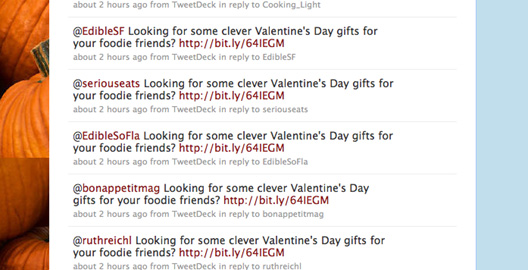