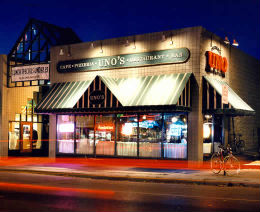 All is not well in the world of chain pizzerias. Earlier today Uno Restaurant Holdings, the company behind Uno Chicago Grill and Uno Pizza Express, filed for bankruptcy protection in a Manhattan courthouse. The Boston-based restaurant chain has incured a $171 million long-term debt over the past few years, and has reached a debt-for-equity-agreement with a major noteholder group that will cut their liabilities by about $142 million. Although the company tried to employ various cost-cutting methods, the economic downtrurn hit Uno pretty hard, with the company reporting a loss of $22 million last year alone.

Recently Eater NY noticed the recent closings of two Manhattan Uno branches -- these were just two of the 17 retaurants the company shut down to try and fix their money crisis, and more shutters are on the way.

Though a lot of chain retaurants have done very well in these tough economic times, Uno's price point may have been just been a bit too high for cash-strapped diners. Regardless, the restaurant group will soldier on, as they have sought court approval for $52 million in debtor-in-possession financing from Wells Fargo to stay in operation while in bankruptcy. In a statement this morning, CEO Frank Guardaria said of the bankruptcy filing:

"The fact is the lifting of our heavy debt burden has invigorated our team. Uno is alive and well and the best days are very much ahead."

If you've had a craving for calorie-rich, Chicago-style stuffed pizza recently, now might be a great time to hit up your local Uno Pizzeria, if it's still open.