To thoroughly enjoy the glory that is Top Chef Vegas, we welcome NYC comedian Max Silvestri to the stage, who is here every week to take us through season six. 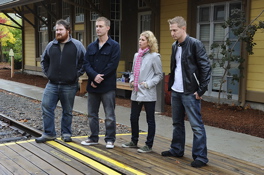 It's season-finale-part-one-time, guys! You know what that means, right? Higher stakes, better cooking, and new haircuts. Jennifer's all, "I'm a pro! Let's get these girls curling." This week's penultimate episode finds only four chefs remaining, Jennifer, Kevin, and the Brothers Voltaggio. Each of the four is tremendously talented and their food has time and time again been on the top throughout the season's challenges. They should all win! Or they should all lose, because without one clear winner everyone's a loser. Go home, guys! Go to your homes, and reflect on why you lost.

We're in Napa Valley, and the contestants roll into the train station to say hi and await their next mission. They are such a Team Strikeforce of strong cooking. Very bad ass. It is like that scene in the beginning of Ronin when all those ex-espionage guys are gathered in the little French cafe waiting to see what their next mission is. Is that reference too obscure? Maybe it's like The Usual Suspects then. "The greatest trick the Voltaggio brothers ever pulled was convincing the world they don't have umbrellas."

A glowingly pregnant Padma Lakshmi arrives at Shining Time Station with Napa Style's own Top Chef Master Michael Chiarello in tow. He seems like a nice enough guy and cook, but he has a way of talking that makes me want to pencil-magic-trick myself, Joker-in-The-Dark-Knight-style. This week's Quickfire asks the chefs to cook on the famed (not famed) Napa Valley Wine Train, a thing built by and for assholes. Their dish must use grapes. Grapes? Grape news, everybody. Who cooks with grapes? "You know what this steak is missing? A bunch of grapes, all over the place." I hope they all make chicken salad and serve it on wax paper. My dog used to eat his own throw up but wouldn't eat grapes because he couldn't tell if they were food or a ball or what the shit was going on. I think he was on to something. (With the eating of his throw up, I mean. PetChow, so nice he ate it twice!)

So what happens next? They cook. On a train. And then give food to the judges that includes grapes. Kevin's dessert isn't quite grape-y enough, and Bryan is chastised for using Concord grapes, which aren't to be found in the Napa Valley. It's so important we care about the important things in life while we are lucky enough to draw air on this planet. The judges have not a bad word to say about Jennifer or Michael's dishes, but Michael's the winner because leaving grapes on the branch is pretty if you are kind of boring. He wins a Prius! Jennifer is really mad because she especially wanted the Prius and needed it really bad. I get that you just drive a 2000 Chevy Cavalier, Jennifer, but no one doesn't want a new car a ton. It's worth about twenty-five thousand dollars. I'm sure Michael will find a way to swallow his medicine and take the car home. "Ugh, this will be such a hassle. Maybe I'll half-bury it in my backyard and use it keep my shovels and rakes and things."

For the final Elimination Challenge, the chefs head to the Rutherford Hills Winery and learn they are catering a crush party for 150 people. A Crush party? Like that movie with Alicia Silverstone! Be careful, chefs. If the judges don't like your food they are going to dump a bag of bees on you and they know you're allergic. Oh, no. It's a grape-stomping party. That is only slightly less dangerous.

The chefs get to work on their two dishes using only local ingredients, one vegetarian and one protein. They go to the farmer's market to pick out their produce and get very excited because at normal restaurants you can't use exclusively farm ingredients because your food costs will be so high you won't make any money. But they've got a big budget for this challenge, so now they can shop like unrealistically rich assholes. Jennifer somehow finds herself unsure of what to cook. Come on, Jennifer. You had months off, and you didn't prepare anything on the off chance you'd be challenged to cook with vegetables and a protein? Pull it together, you lunatic.

The party begins! And what a party it is. Everything from old white people to young white people. It's really beautiful. The United Monochrome of Benetton. Padma and the judges start making their rounds, and Padma's all, "Dodge this" because she is dressed like she's in the Matrix. 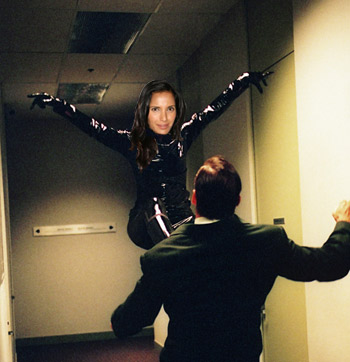 The chefs cook a lot of good looking and complicated food! I considered either transcribing the dishes or posting pictures of the styled food shots, but both are boring. Watch the show if you care so much. The chefs arrive at the Judges Table unsure of how their food will be received, but they all seem pretty confident in how they did. They did well! Congrats. You should all get $100,000. The end.

The judges love-loved Kevin's vegetarian dish, a simple arrangement of a radish and some other stuff. Perfectly seasoned. Michael's eyes roll so hard that Bryan can almost taste them. (Huh?) But Kevin's grass-feed brisket didn't get enough time braising and everybody seems to know it. The judges say "tough," Kevin says "toothsome." Toothsome is a great word, and it's a little funny that Michael doesn't know it and is so completely unself-conscious about asking about it. "What's that word you used? I like that word." He is like a curious child! An angry, tattooed child.

Bryan's short rib was well cooked, but its fig glaze didn't taste like figs. Don't you hate it when that happens? Michael's egg wasn't properly cooked for everyone, and it seemed to overpower his tiny vegetables. Gail suggests he should have cut them in a more rustic style, and I don't think Michael appreciates that. He doesn't do rustic. Rustic is for homeless people. Jennifer over-seasoned her basil and goat cheese dish, loading on the salt, and despite enjoying the duck, Tom is confused why she let her coals die out. I'll be honest. It seems like Tom and the judges have already decided she should be gone and are laying it on pretty thick with the talking about how scattered she seemed and her duck dish coming out differently than she'd planned due to carelessness. Isn't just what's on the plate supposed to matter, Tom? You all seemed to like the duck, so who cares that her coals died out? Maybe it's a happy accident. Or maybe you really want a finale with the Voltaggio brothers and Kevin. Which you're going to get, because Jennifer is eliminated. It is very sad but her career is doing great so let's not cry for her guys. Let's cry for how damaged the Voltaggio brothers' relationship actually seems to be. On to next week, friends! One for the books.