Share All sharing options for: The Worst Fast Food Movie Tie-Ins of 2009

While it was a relatively good year for food on film, 2009 brought its fair share of completely puzzling cross-promotions between movies and chain restaurants. Here's a breakdown of some of the low points of The Year in Fast Food Movie Tie-Ins, 2009:

Not only was Subway featured in a few scenes of the film, but one of the film's reptilian bad guys, the Sleestaks, appeared in this strange commercial advertising the chain's new Tuscan Chicken Melt:

2) Twilight Saga: New Moon at Burger King: Teenagers love junk food almost as much as they love Twilight, so, a New Moon tie-in at Burger King almost makes sense. Describing the chain's burgers as having "the flame-fresh taste all Twilight fans can agree on" in the commercial below, does not:

3) Sherlock Holmes at 7-Eleven: Sherlock Holmes hasn't been released yet, so no one really knows whether or not the film will appeal to fans of the beloved 19th century mystery novels, or the Slurpee-guzzling late night taquito crowd. One thing is for certain, though: Sir Arthur Conan Doyle is rolling in his grave with this ad: 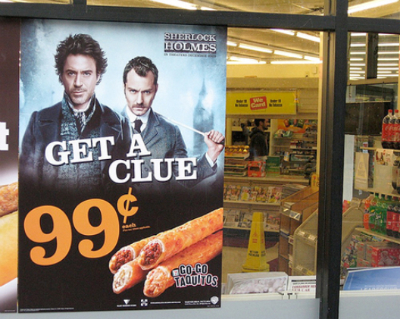 4) Transformers 2: Revenge of the Fallen at Burger King. Critics had a lot of reasons to dislike the newest Transformers film, but there was something of a furor caused over what many thought was the portrayal of two of the films robot characters, Mudflap and Skids, as offensive, jive-talking black stereotypes. While director Michael Bay denied these allegations, it probably wasn't the best idea to put the robots in the ad for the Burger King Kids Meal: