Share All sharing options for: 11 Fun Facts Learned From Knives at Dawn 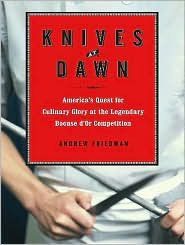 Today, Knives at Dawn is released on bookshelves everywhere. It's the story of the 2009 Bocuse d'Or cooking competition as author Andrew Friedman follows around Team USA from its inception in 2008 to its training process in Yountville, CA to the "Culinary Olympics" climax in France earlier this year. The cast of primary characters is full of familiar faces: Daniel Boulud and Thomas Keller as the movement's new leaders, Roland Henin as the coach, Gavin Kaysen as the Bocuse d'Or veteran, and of course, Team USA itself: chef Timothy Hollingsworth and commis Adina Guest, both of the French Laundry. The book is an absolute must-read for anyone remotely interested in the Bocuse d'Or competition, the ways of the French Laundry kitchen, and Daniel Boulud's childhood roots. That said, without giving away too much of the plot and the phenomenon that is the Bocuse d'Or, here are a few (very random) highlights.

1) Roland Henin and Keller first met on a beach in Rhode Island during the '70s, when Henin noticed that Keller was always accompanied by "leggy companions," so he threw a Frisbee in his direction. (p. 46)

3) Originally, Boulud had sold Bravo on the prospect of documentary series of eight to twelve episodes, but Keller nixed the idea. (p. 43)

5) Team USA never learned the details of the proteins (size, frozen-ness, etc.) ... simply because they couldn't find the facts on the Bocuse d'Or website. (p. 193)

6) When dining at Paul Bocuse's namesake restaurant in Lyon, Team USA took a photo with the legendary chef in the kitchen prior to the meal. Then, before the first course was even served, they were presented with a menu that had the photo of themselves already printed on it. That, friends, is showmanship. (p. 221)

8) How much respect does Keller have for Paul Bocuse? While dining at his restaurant, Keller spent a portion of the evening taking pictures of the pictures on the walls. (p. 247)

9) One of the proteins in the '09 Bocuse d'Or competition was cod. Hollingsworth, who tied the best American finish ever, hasn't put cod on the menu at the French Laundry since. (p. 297)

10) Just FYI, this was the promotional photo from the eventual winner, Norway's Geir Skeie.