For the final Momofuku cookbook giveaway, we asked for testimonials from people who think they are David Chang's biggest fan. Here are the five winners:

1) From the inbox and pictured above: "My wife is absolutely obsessed with Chang and his rapidly growing empire. After dinner at Noodle Bar last month, she deemed it, and I quote, "of the utmost importance that I get the peach logo tattooed on my hip". I didn't really think much of it, until she came home one day with this little gem on her backside. Well done Mr. Chang, [your] mark is now all over my wife's rear-end. I'm not sure I really want to encourage this type of behavior, but if she isn't one of his biggest fans, I don't know who is."

2) In someone's home, there is a piece of binder paper with a grammar mistake by David Chang, framed on the wall:

"All of our friends know and accept our obsession with David Chang's cooking. One friend in particular, a chef, used to work for one of those super expensive Japanese knife companies. She had the good fortune of working with Chang on the cutlery, dishes, etc. for Ko. Knowing what a fan of his cooking my husband and I are, and having absolutely no shame, she asked him to autograph a piece of paper for us, which he did. She had it framed for us and we were so thrilled that we hung in our kitchen for inspiration. It reads:

To Matt & Linda, Thanks so much for you're support. --Happy Turkey Day! David Chang

Funny thing about it, though, is that there's a huge glaring typo! Chang wrote "you're" instead of "your." Normally a thing like that would drive us nuts and I would mock it endlessly, but when Chang misspells something, it's simply endearing.

p.s. I also knit the Momofuku logo which is in the background of the picture." 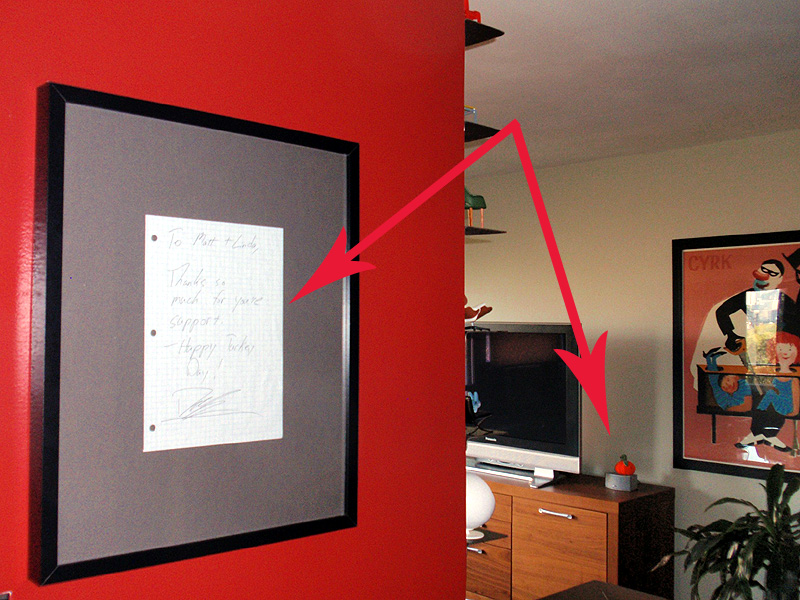 3) Here we have a gross tale of what happens when crack pie meets the floor of a public space: "

As a thank you for a favor I did for a friend, I received a Crack Pie via overnight mail. It was a huge surprise (especially because Milk Bar had just opened that week), and in a hurried, nervous excitement while unwrapping it, I DROPPED the Pie. I screamed as I realized that it had slumped into itself onto the gritty of my foyer of my apartment building. And I basically did what any person who had longed for a taste of the Crack Pie would do: I ate it off the floor. I called my roommate to bring two forks downstairs and we downed the pie in about 30 minutes. Afterward, I was entirely paralyzed by the amount of sugar I had consumed and I stayed in a blissful food coma for a few hours. It was probably the best food experience I've ever had in my life."

4) Everyone all together now say "Awwwww": "

Attached is a video of our 2-year-old daughter, Hana, who is David Chang's biggest fan. So big a fan, in fact, that we were forced to create the attached video of her eating Momofuku noodles (or "noolools", as she says) and dancing with excitement'

5) And finally, the sheer silliness of the Photoshop job below is sure to put a smile on even the biggest Chang detractors: 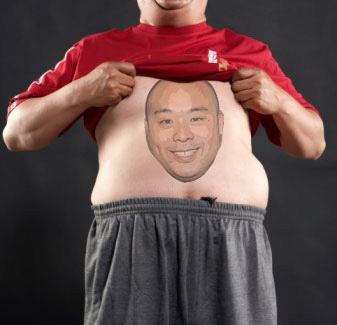 Many thanks to all who played along with all the Eater contests; to all the winners, we'll be in touch shortly.
· Win One of Fifty (50!) Autographed Momofuku Cookbooks! [~EN~]