At the time of Gourmet's untimely death last month, editorial plans were well underway all the way past summer 2010, so we put out a call for unpublished Gourmet feature articles. Today, we run one of those, specifically one that was slated for gourmet.com. And for those interested, Eater's offer still stands. 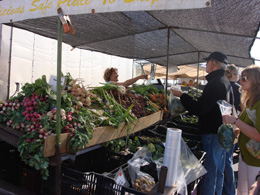 When the eat-local movement began, chefs had to visit early-morning farmers markets to see what was available, then hand pick their own meat, seafood, and produce and haggle over prices. Cultivating connections with small-scale farmers and purveyors was a courtship that took time and energy—so it was inevitable that someone would come along and help speed up the process. The website Fork & Shovel, founded in 2004, became the Match.com of farmer-chef relationships, but this demographic is also partial to a more old-school model: speed dating.

Several locavore organizations have made speed-dating-style events an integral part of their work. One such group is the Portland Chapter of The Chefs Collaborative and Ecotrust, which first introduced speed-dating methods in 2003, two years after launching their annual Farmer-Chef Connection Workshop in 2001. As committee member Larry Lev, of Oregon State University, said, "Many farmers and chefs didn't really know how to start a conversation with someone on the other side—kind of like a middle school dance. The speed-dating approach provided a forced structure to put them together."

Handy notes were provided to the chefs and farmers before the event with suggestions as to how they could form a mutually beneficial relationship with the other group.

Inspired by the farmer-chef networking event in Oregon, the Idaho Department of Agriculture's "buy local" program, Idaho Preferred, began hosting Farmer-Chef Collaborative events in early 2008. This year, 40 restaurants (represented by 60 chefs) and nearly 100 farmers attended the group’s four events. According to Kim Polzin, a member of the Idaho State Department of Agriculture’s Marketing Division, the event is "a cross between a trade show and a speed-dating event." Farmers set up booths around the room, chefs are assigned a starting location, and a cowbell rings every three to five minutes to remind chefs to rotate.

Eight years after the first Farmer-Chef Collaborative event, it is difficult to pinpoint exactly how many farmer-chef events are hosted around the country. Some meetings, such as the Farmer-Chef Connection hosted by Edible Phoenix and Slow Food Phoenix last summer, have ties to the founding group. Other speed-dating events, such as the one held last spring in Stevens Point, Wisconsin, and one in Healdsburg, CA this past February, were organized by local organizations founded to strengthen relationships between farmers and restaurants.

Luana Hiebert of Heritage Farms in Sandpoint, Iowa, met Karen Forsythe, owner of Sandpoint’s Di Luna’s Café, at a Farmer-Chef Collaborative in Coeur d’Alene in February. This summer, Hiebert provided an average of 40 dozen eggs per week, and the only problem from Forsythe’s point of view was that supply did not always meet demand. What surprised Heibert most about the Collaborative was the variety of restaurant sizes in attendance, which provided a small-scale, sustainable farmer like her with a unique opportunity to meet potential clients.

These events aren’t always limited to farmers and chefs, however. At the Boise event, Vernon Bauer, chef at Saint Alphonsus Regional Medical Center, made 12 valuable contacts, one of whom was Angie West. West is not a farmer; she and her husband, both retired Marines, bottle mountain spring water that flows on their five acres located just north of Boise. What West found most surprising at the farmer-chef collaborative was Bauer’s interest because, as she said, “We would never have thought of making that contact on our own. The hospital is now one of our biggest clients.” In addition to the Medical Center, West also scored multiple sales in local area with caterers, cafes, and hotels.

While speed dating was originally invented to unite singles looking for love, the format is surprisingly well suited to farmers and chefs, who are often short on time but eager to make valuable contacts. And the more of these connections they make, the more we all get to enjoy the (ahem) fruits of their labors.
—Louise McCready