New York-based designer David Rockwell--the playful/theatrical architect behind last year's Oscars and last decade's Nobus--has been tapped, for the first time, by New York to design the magazine's eleventh New York Taste event. Bringing together high-tech and low-craft, Rockwell worked with his in-house LAB, run by whiz-kid industrial designer Tucker Viemeister, to come up with a bunch of forks and knives and spoons and plates and projections that represent the forty-plus contributing chefs, and their tastes. We caught up with D. Rock to ask him what he was doing, and why.

Rockwell's taking the big white space of the Ace Gallery's old Hudson St. location and turning it into a big ol' jazzy and colorful space--think Nobu 57 and Adour's wine bar, on acid--punched up with an entry wall lined with a bunch of cutting boards laser-cut with the participating chefs' names -- names like "Andrew Carmellini" and "Michael White" and "Zak Pelaccio." Next to each cutting board there's gonna be a stainless steel cup filled each each chef's favorite spice or taste. "You'll have a chance to smell or taste something related to each one," Rockwell told us earlier today. "That excites me already."

The central bar is where it gets crazy, with the biggest feature being a quilt made out of paper plates hanging in space. From each side, LAB is projecting images that change according to taste categories. So, one minute it'll be all things that are sweet; the next, all that are bitter. "It feels very animated, but it's projecting onto these paper plates." 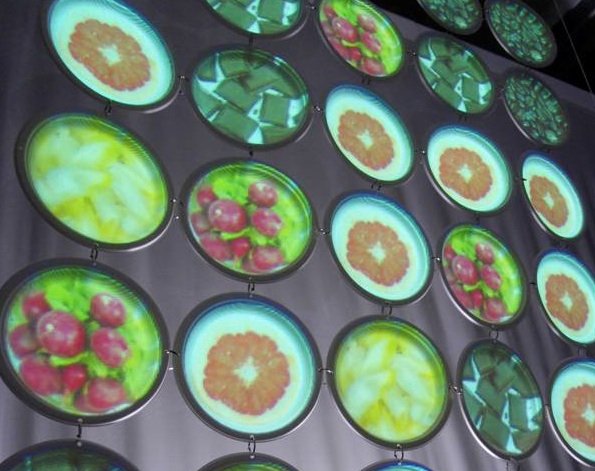 Back bar is where it gets even crazier. "We took four hundred and fifty paper plates, used our handy-dandy new laser cutter, and cut them into four different patterns inspired by modern china patterns," Rockwell said. "Those patterns will spell out the word 'TASTE' in laser-cut paper plates."

And no; no one's forgotten about the recession. "It was kind of easy," Rockwell told us about collaborating with New York Taste (short answer on why: they're neighbors; he likes events.) "And one of those things where I felt like we could do something really fun, without having to use a lot of resources, that sort of suited the... moment."
· New York Taste [New York]