Share All sharing options for: Top Chef Episode 9: They Are Now Ashless Chaps

To thoroughly enjoy the glory that is Top Chef Vegas, please welcome New York comedian Max Silvestri, who is here every week to take us through season six. His words follow: 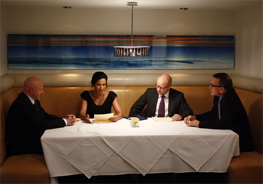 Eight left, guys. Playtime is over. (What I mean is that producers made Eli mail his Legos back to his parents. "No, they're K'NEX!!" I bet he yelled.) We are getting to the really serious stages of the competition, as serious as something can be when fates are decided by knives with words on them. With Ash gone and Robin still here, the chefs all do their best to cope. Jennifer cooks in a bathing suit and heels because sometimes the only way to get a clear head is to think like the natives, and when I say natives I mean waitresses at pool bars. Michael Voltaggio gives his brother a peace offering of a breakfast burrito. Those two love to compete and compete to love. Huh? What I think I am saying is that whoever of the two wins (assuming Kevin leaves the show because he gets sent on an errand to Rivendell by Gandalf) gets to sleep with Padma. Maybe one of them is the father and that's why she can't announce it?! Watson, get me my cocaine, am I right? Because I am solving mysteries.

The episode's guest judge is the prince of conscientious cooking, Chef Rick Moonen, a man who sounds exactly like Sydney Pollack. It was unnerving. I kept expecting him to say, "For this week's Quickfire, please help with this girl who OD'd on coke in my study. The house password is Fidelio." Instead he talked about how cooking is all about sustainability. It's also all about working together. It seems like watching this entire season you could really get an idea of what cooking is all about. "Cooking is simple! It's all about a few things: flavors, ingredients, working together, leadership, instincts, training, technique, heart, speed, blindfolds, taking risks, playing it safe, presentation, taste, smells, plastic wrap, crunchy snacks, broth, Texas hold 'em, pleasing your guests, staying true to your beliefs, wine pairings, and knowing what everybody is allergic to. Go!"

The chefs draw knives. Eli is first, reads from his knife, and loudly proclaims, "Nothing!" That is also his answer to the question, "What is better than a kiss from Mom right after she makes her 26 year old son breakfast every morning?" It turns out Jennifer and Michael are team captains. They pick their teams for this challenge. Jennifer takes Kevin, Isabella, and Laurine. Michael picks his brother, Eli, and Robin. Guess who was picked last? You get one guess. Hint: her head is the color of a Subaru.

It turns out this is a relay cook-off. The chefs can only confer on the order they will cook. Each chef will cook for ten minutes while their teammates remain blindfolded (really?) and then the next chef will have to enter and figure out what's getting cooked and what they can do. This challenge is great! The chefs have so little time to figure out what's going on, what's being cooked, and what they should do. It is also hilarious that they get blindfolded. It'd be very easy to just put them in another room, but it is so needlessly disorienting to be blindfolded for upwards of 30 minutes. Mike clasps his hands and looks like a peaceful blind angel. 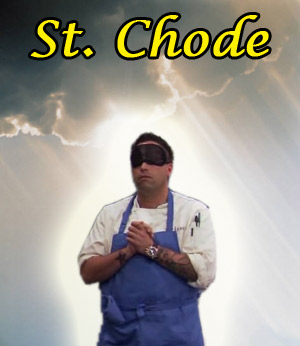 Both teams end up making tremendous looking dishes. Michael's team prepares a pan-roasted NY strip with whipped miso, an avocado puree and vegetables. Jennifer's team makes sablefish with sauteed mushrooms, shitake broth and a radish salad. Jennifer calls it trout at first, though. Hah! You work for the best seafood chef in the world. Really nice going. Despite that flub, her team wins. Laurine is really excited to win, because she says she's been "hanging around the middle" in past challenges. Right. Unlike this challenge where you went second, and contributed a pot of burnt olive oil and some scallops that never got cooked. Way to stand tall!

That winning team gets the advantage in this year's long-awaited Restaurant Wars, which as we know captures all the monotony and routine of life in the military without any of the danger or excitement. The winning team also gets a ten thousand dollar Vegas coin, which they can split, or they can let it ride. If they win Restaurant Wars, they get ten grand each. They let it ride! So very cocky. Two other things of note in this year's Great War: they must cook sustainable fish, as Chef Moonen lists on a playing card. And they will not be responsible for decorating their restaurant. Really? How odd. That always seemed such a relevant and enriching part of each season's challenge. "Why were you eliminated from that show about cooking in kitchens?" "Because I am bad at picking at candles and I couldn't find the right water glasses at Pier 1."

Jennifer's team names their restaurant Mission. That is a good name! The kind nobody would ever remember or care about, which on this show is a wise choice. The other team combines their names into Revolt, which is such a cartoonishly bad name it almost seems planted by the producers. Also they make the E backwards, in case the name wasn't insulting enough. Somehow they convince themselves that the name will make people think of revolution, not the word revolting, or you know, the word "revolt", as in the "the food at this restaurant revolts me." Way to go, brain trust. You couldn't have done better? "We came up with our name after having discussed it for a long time, then we realized it was right in front of our eyes. We discussed it! So we are calling our restaurant Discussed Ing. I don't know why we put the "Ing" at the end but it seems like we often make very bad decisions." Eli also prepares his front of house outfit, which is untucked and fits him so weirdly it looks like he snuck out to a carnival and asked Zoltar to make him a kid again. "I miss my mom." 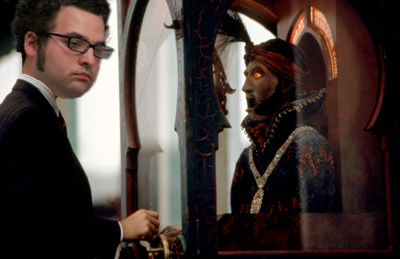 MIssions decides to forgo any dessert, based on how often it has hurt past Restaurant War teams, and judging by the strength of Kevin's past meat dishes, it seems like a pretty smart plan. Seems! R3tard is making two desserts, and as much as Michael tries to bully Bryan and Robin about them, they both seem pretty darn good. The judges eat at Revolt first, and despite obviously hating the terrible name, they are thoroughly impressed by meal. Tom can't get enough chicken and squid, and Toby declares the pear tart the best dish Robin has ever made. Despite Eli rocketing through service like someone let him have orange soda after 8pm, the judges like his intensity as a host. At a certain part Michael and Robin get into a swearing fight, but it is really boring and they should both settle down so I won't bother repeating it here.

Things don't go over so well for Mission. First the chefs screwed up and scheduled their service so all the chefs were responsible for two dishes at a time, so someone is constantly getting slammed. Jennifer is way behind on her fish orders, and she makes the odd decision to steam her shellfish to order. Woof girl, as anyone can tell you (who listened to the professional chef judges complain) you should never do that. Padma asks for salt for Mike's dish. Isabella is very confused, as he knows he "salted it personally." Ew. He finds a way to make that sound disgusting. "Before sending that dish to Padma, let me just say that I found on my person something with salt and put it on her dish special, personally, so trust me, me and my body know how much of my salt she just ate." Gross that you said that in your brain, Mike. And the judges are now disappointed there's no dessert. No pleasing these guys. If you are Mission, I mean.

In the supply closet, Mission already seems assured of their loss. Isabella tells Revolt that if they are on the bottom, they must be truly terrible. Well don't worry about that, Mike. That is not the case. Revolt wins. The judges say it is the best restaurant in six seasons of Restaurant Wars. What an honor! Despite the high compliments, Robin still rolls her eyes and gets all weird and passive aggressive when Michael tries to sugar coat their disagreements. Really, now's the time, Mom? Doesn't Eli need to be changed? Save it. Michael is the overall winner, and he receives an autographed copy of Fish: Without a Doubt, Chef Moonen's book. Which Chef Moonen calls his bible? It is weird to call your own book your bible. Would God say that? "You should read this. It's my Bible." I guess he would. Michael also gets Mission's forfeited ten grand Vegas coin, and he offers to split it with his teammates. Bryan turns it down and is clearly furious with the whole thing. He says he is tired of his brother bullying everyone. Oh boy. I don't see that being more important than $2,500.

Mission is so clearly on the bottom. There is not much nice to say about any part of the meal. I guess Mike's food was not a total disaster, and Jennifer's haddock was cooked well. But everything else? Yikes. A broken butter sauce, fishy bouillabaisse, a non-clear consomme, unsalted food, long waits, raw lamb, and a hostess who seemed like her job was a condition of her parole. Jennifer seems on the verge of crumbling. But it is Laurine's shoddy service, poorly cooked lamb, and lack of control of her restaurant that the judges deem knife-pack-worthy. There is lots of crying and sadness and anger. Jennifer feels terrible for screwing things up, but Laurine says, "You deserve to be here." What a sport!"
— Max Silvestri
· All Top Chef Coverage [~EN~]