Throughout the New York City Food & Wine Festival this weekend, Eater welcomes bloggers, journalists and food world stars to our lounge at the Standard Hotel in NYC's Meatpacking District. As the peeps pass through, we're chatting them up and spitting out the dialogue here in this business, From the Eater Lounge. 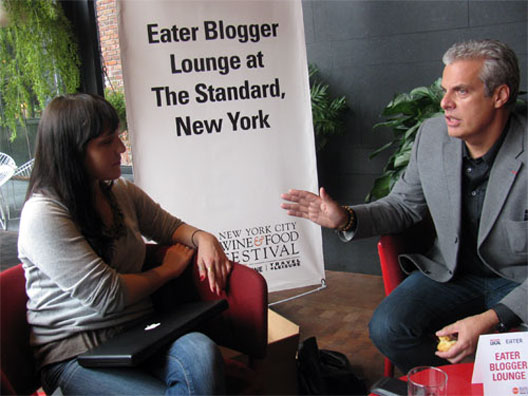 It's been an insane few hours at the Eater Lounge so far. Interview highlights with some of the chefs who've passed through:

Eric Ripert (above): [What’s next for you?] Season 2 [of Avec Eric], I hope. Then I want to do a book. Maybe somehow related to Avec Eric, but not necessarily a companion. I want to be inspirational and, as usually is my thing, demystify creativity.

Daniel Boulud: "[Les Pleiedes at Café Boulud] is going to be a more classic bar—a classic hotel bar. It's opening in early November, and will actually have some bar food. But overall, this is very exciting: Café Boulud is starting up a new life."

Michael Psilakis: "There’s stuff here on the table in the states, but the Greek thing is really dominating everything for me. It’s penciled to open up next May. So, until then, that’s the only thing I’m concentrating on right now."

David Rabin and Geoffrey Zakarian: Rabin: "I wanted to drag Geoffrey down here to talk about our upcoming spot The Lamb's Club. The developer is telling us that the Chatwal Hotel will be ready between March and April. When the hotel opens, The Lamb's Club will be ready."

Shaun Hergatt: "Thank goodness we finally got our doors open after construction delays, but we opened in the summer and that time of year is a disaster. I’ve opened eight hotels and three restaurants, and not one has opened on time."

Do click through on each chef's name for the full Q&As on Eater New York. And: more to come.
· Complete NYC Wine & Food Festival Coverage [Eater NY]